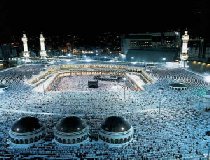 Al-Masjid Al-Ḥaraam includes the Ka‘bah, the area around it that is allocated for Tawaaf (circumambulation), the buildings of the mosque, the equipped praying spaces, and all the expansions that the mosque has undergone throughout history. Al-Masjid Al-Ḥaraam is located in the heart of the valley of Ibraheem, may Allah exalt his mention. Its height is around 277m above sea level.

There are many names for this blessed mosque such as: Al-Bayt (the house), Al-Bayt Al-‘Ateeq (the ancient House), Al-Bayt Al-Ḥaraam, Al-Bayt-ul-Ma‘moor (The house that is frequented by visitors), the Grand mosque, Al-Haram, Al-Haram Al-Makki, the Ka‘bah, and many others.
The Ka‘bah is the first structure that was ever built for the worship of Allah The Exalted; Allah The Exalted Says (what means): {Indeed, the first House [of worship] established for mankind was that at Makkah – blessed and a guidance for the worlds.} [Quran 3:96]
Abu Tharr, may Allah be pleased with him, reported, “I asked the Prophet

‘O Messenger of Allah, which mosque was first established on earth?’ The Prophet

said: ‘Al-Masjid Al-Haraam.’ I asked, ‘Which was established next?’ The Prophet

replied: ‘Al-Masjid Al-Aqsaa.’ I inquired, ‘How long was the period between them?’ He

then added:  ‘Wherever [you may be and] the prayer time becomes due, perform the prayer there, for that is a Masjid (i.e. a place where you can perform prayer.)’” [Al-Bukhari and Muslim]
Ever since Ibraaheem, may Allah exalt his mention, built the Ka‘bah and called upon people to go to it for Hajj, it has been given the greatest share of virtue, honor, care, and glorification. The people of Makkah and from everywhere else have taken good care of the Ka‘bah, covered  it with cloth and renovated it. When  Islam appeared, the Ka‘bah was given an even greater share of honor and glorification.
During the life of the Prophet,

gave.
However, Al-Hajjaaj ibn Yoosuf Ath-Thaqafi then rebuilt the Ka‘bah undoing the renovations that was made by ‘Abdullaah ibn Az-Zubayr, may Allah be pleased with him, as he thought that the modifications made by ‘Abdullaah ibn Az-Zubayr, may Allah be pleased with him, were based on his personal judgment. Al-Hajjaaj ibn Yoosuf Ath-Thaqafi took the black stone out of the Ka‘bah and left only one door for it.
The Muslims maintained assigning great care and honor to the Ka‘bah during the Caliphate of ‘Abd Al-Malik ibn Marwaan and other Umayyad caliphs. Furthermore, special servants and workers were appointed to work in Al-Masjid Al-Ḥaraam.
Later, the Abbasid Caliph Abu Ja‘far Al-Mansoor expanded the total area of the mosque, tiled its floors with marble, built a wall around the Zamzam Well to protect people from falling in it, and added another arcade to the mosque.
During the Caliphate of Al-Mahdi, Al-Masjid Al-Ḥaraam witnessed a major expansion; the houses between the Ka‘bah and the Mas‘a (the area where pilgrims perform S'y between As-Safa and Al-Marwah)were demolished so as to connect the Ka’bah and the Mas’a expanding the area of the mosque. These expansion works took four years to be completed.
Then came the reign of Haaroon Ar-Rasheed who erected a shade for the scholars on the mosque’s roof. As for Al-Waathiq, he added copper lantern posts for those who performed Tawaaf at night.
In the fourth century, the Muslims suffered  the invasion of the Qarmatians,  who were a malicious Shiite  Isma‘ili groupthat revolted against the ‘Abbasid Caliphate and violated the sacredness of the Ka‘bah. Tragically, they killed many Muslims and stole the Black Stone and took it to Ihsaa’ [an oasis region in eastern Saudi Arabia that is located about 60 km inland from the Persian Gulf] and did not return it to its place except after  a very long period of time.
In 1039, the northern and eastern walls of the Ka‘bah were damaged by unseasonable heavy rains; the Ottoman Sultan Selim rebuilt the Ka‘bah and restored parts that were ruined by the rain.
The latest renovation took place in the modern age by the Saudi government in 1409 AH/ 1988 AD. The total area of Al-Masjid Al-Ḥaraam reached 256,850 m2 so as to accommodate up to 1 million worshippers at one time.
Virtues of Al-Masjid Al-Ḥaraam:
It is the greatest mosque of all, the Qiblah (prayer direction) of all Muslims, and the symbol of the unity and power of the Muslims.
Allah The Exalted has chosen the best land ever on which the greatest mosque was built and ordered Ibraaheem, may Allah exalt his mention, to build the Ka‘bah. Furthermore, Allah The exalted decreed for visiting Al-Masjid Al-Ḥaraam and circumambulating around the Ka‘bah to be one of the greatest and significant acts of worship. Allah The Almighty bestowed a great share of sacredness, sanctity and prestige for that mosque in the souls and hearts of all Muslims. Hence, the hearts and souls of all Muslim are inclined toward visiting the Ka‘bah. Indeed, Al-Masjid Al-Ḥaraam has its unique and high rank in the hearts and eyes of Muslims.
Moreover, Allah The Exalted favored praying in Al-Masjid Al-Ḥaraam with increased rewards in comparison to praying anywhere else. It was authentically reported that the Prophet,

, said: “… A prayer in Al-Haram (i.e. Ka’bah in Makkah) is one hundred thousand times better than a prayer elsewhere.”
A prayer in Al-Masjid Al-Ḥaraam equals the honor and reward of 55 years, 6 months, and 20 nights of prayers in any other mosque- Al-Masjid An-Nabawii and the Al-Aqsa Mosque aside.