The Blessed Days: Day of ‘Arafah 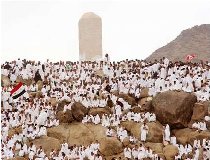 The Day of ‘Arafah (the 9th day of Thul-Hijjah):

This day surpasses other days in virtue and merit and therefore it is worth being discussed independently in order to clarify the aspects of its excellence and honor:

Firstly: It is the day of Allah The Almighty perfected the religion and completed His favor:

"Indeed you recite a verse which if had been revealed to us we would have taken that day as a day of celebration." ‘Umar

said, "Indeed I know where and when it was revealed, and where the Messenger of Allah

Sufyaan said, "I doubt whether it was a Friday or not." Allah The Exalted Says (what means): {….This day I have perfected for you your religion and completed My favor upon you and have approved for you Islam as religion….} [Quran 5:3] [Al-Bukhari]

(what means): {That Allah may forgive for you what preceded of your sin and what will follow and complete His favor upon you and guide you to a straight path.} [Quran 48:2]

Secondly: It is a day of ‘Eed (Islamic festival):

It is narrated on the authority of Abu Umaamah

said: "The day of ‘Arafah, the day of Nahr and the days of Tashreeq are our ‘Eeds, for us Muslims. They are days for eating and drinking."

Thirdly: Fasting the day expiates the sins of two years:

In a Hadeeth (narration), the Prophet

said about the virtue of fasting the day of ‘Arafah (for non-pilgrims): "It expiates (the sins of) the past year and the coming (year)."

Fourthly: It is the day of forgiving sins and exemption from Hell:

It is narrated on the authority of ‘Aa’ishah

said: "Allah exempts more of His slaves from Hell on the Day of ‘Arafah than on any other day, and Allah draws near and proudly says to the angels, 'What do these people want and seek?'" [Muslim]

Commenting on the Hadeeth, Ibn ‘Abdul-Barr

said: "This indicates that their sins have been forgiven, as Allah would not boast of sinful and wrongdoing people unless after their repentance and His Forgiveness. Allah knows best."

The prescribed deeds on the Day of ‘Arafah:

said: "…I hope Allah that fasting the day of ‘Arafah expiates sins of the past year as well as the next year…." [Muslim] Fasting during that day is prescribed only for those who are not pilgrims, as it is not permitted for pilgrims to observe fasting on that day. Controlling one's bodily organs from doing prohibited matters is asserted on that day. In a Hadeeth narrated on the authority of Ibn ‘Abbaas

said: "On this day (i.e. the day of ‘Arafah) a whoever guards his hearing, seeing and tongue will be forgiven."

It is known that guarding the body’s organs preserves one’s fasting and Hajj. Consequently, many factors which enjoin towards obedience and abandoning disobedience are collected.

said: "The best supplication is that of the Day of ‘Arafah, and the best thing that I and other Prophets before me said, is: 'Laa ilaaha illallaahu wahdahu la shareeka lah, lahul mulk wa lahul hamd wa huwa ‘ala kulli shay’in qadeer (There is none worthy of worship except Allah Alone and He has no partners, dominion and praise belong to Him, and He is over all things Omnipotent)."

Commenting on the Hadeeth, Ibn ‘Abdul-Barr

said: "The Hadeeth stands as evidence that the supplications on the Day of ‘Arafah are most probably answered and that the best of remembrance of Allah is to say, 'There is none worthy of worship except Allah.’"

said, "The Hadeeth means that the most frequent words with which the Prophet

As it is mentioned in the deeds of the ten days of Thul-Hijjah, it is recommended to repeat Takbeer in all times and at every place where it is permissible to mention the Name of Allah The Almighty. The scholars said that there are two types of Takbeer:

First: The Takbeer which is not restricted to a specific time, which is prescribed in every time during the night and day. It starts with the start of the month of Thul-Hijjah and lasts until the last day of the Days of Tashreeq.

Second: The Takbeer restricted to a specific time, which is prescribed after prayers. According to the chosen opinion, Takbeer is said after all prayers, whether obligatory or voluntary. It is starts from Fajr (Dawn) prayer of the Day of ‘Arafah and lasts until the last day of the Days of Tashreeq.