The Standing Place of Ibraaheem, may Allah exalt his mention 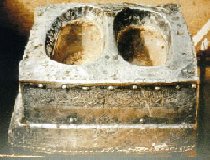 It is the stone that Ibraaheem, may Allah exalt his mention, stood on when he was building Al-Bayt Al-Haraam. The story of the building of the Ka‘bah was narrated by Al-Bukhari on the authority of Ibn ‘Abbaas, may Allah be pleased with him. He said that the Prophet,

, and said, "When we came with the Prophet

to the House, he touched the corner and (made seven circuits) performing Ramal (walking briskly) in three of them and walking four. After this, he went to the Standing place of Ibraaheem, he recited the verse in which Allah The Almighty Says (what means):{And take, [O believers], from the standing place of Ibraaheem a place of prayer}.This standing place was between him and the House. He recited in two Rak‘ahs (units):{Say, "He Is Allah, [Who Is] One}(i.e. Surat Al-Ikhlaas) and{Say, "O disbelievers}(i.e. Surat Al-Kaafiroon)." [Muslim]