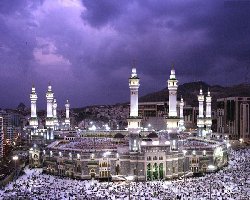 Makkah is the ancient House, the sacred and the safe sanctuary which Allah The Almighty honored and elevated. It has a great status and elevated rank that is unequalled.

How could it not be so when it has the first House of worship established for mankind where they could worship Allah The Almighty and get closer to Him. It is the House that was rebuilt by the intimate friend of Allah, Ibraaheem, may Allah exalt his mention. Allah The Almighty elevated the rank of this mosque by sending the Seal of Messengers, Muhammad,

there. This House is the place of all virtues and everything that is noble. It is in this mosque that ranks are elevated, sins are forgiven and people compete in good deeds as it is a place of mercy and worship.
The virtues of Makkah are so many and we will present some of them so that Muslims would know the sanctity of this city and its rank in the sight of Allah The Almighty. Among the virtues of Makkah are: