Excellence of the First Ten Days of Thul-Hijjah - II 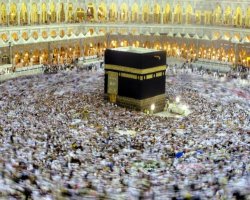 This act of worship has an advantage over other deeds, since it is specified in the verse in which Allah The Exalted Says (what means): {…And mention Allah on known days over what He has provided for them of [sacrificial] animals…} [Quran 22:28] Commenting on the verse, Ibn ‘Abbaas

said that the known days are the first ten days of Thul-Hijjah. The meaning of mentioning Allah The Almighty is to mention him with praise and thankfulness for what He has provided for them of sacrificial animals. This includes Takbeer (saying Allahu Akbar), mentioning the Name of Allah when one slaughters the Udh-hiyyah (the 'Eed sacrifice) or the Hady (sacrificial animal offered by the pilgrim). In a Hadeeth, the Prophet

said: "So, intensify Tahleel, Takbeer and Tahmeed during these days."

It is a Sunnah (Prophetic tradition) to repeat Takbeer loudly in Masjids (mosques), homes, roads, markets as well as other places. A man does so loudly and a woman does it in a low voice to exalt Allah The Almighty. As for the manner of Takbeer, there is no manner traced back to the Prophet

. The soundest manner is reported from Salmaan

as well as the Taabi‘een (the generation who followed that of the Companions).

Some people neglect the Sunnah of Takbeer and therefore it is an opportunity to earn reward by reviving this Sunnah. In a Hadeeth, the Prophet

said: "A person who revives a Sunnah that has been neglected after my death will get a reward similar to those who do it while they have their reward complete." It is reported that Ibn ‘Umar and Abu Hurayrah

used to go to the market during the ten days (of Thul-Hijjah) and utter Takbeer aloud and then people would imitate them. It means that people would remember Takbeer upon hearing them and they would repeat Takbeer due to that.

Collective Takbeer with one voice and tone or when one repeats Takbeer and a group of people repeats after him is an innovated act in religion. A Muslim who is keen to follow the Sunnah of the Prophet

should avoid such actions. It is permissible to teach one who is ignorant about the manner of Takbeer until he learns. If it is argued that collective Takbeer is a reason and a way to revive this Sunnah, this is answered as follows: repeating Takbeer loudly revives the Sunnah and there is no need to make it collective. Moreover, a person who wants to do the Sunnah does not wait for people until they do it. Rather, he takes the initiative to do it in order to be a role model for others.

It was narrated on the authority of Hafsah

that she said, "Four deeds the Prophet

never abandoned: fasting the day of ‘Aashooraa’ (the 10th day of Muharram), the first ten days (of Thul-Hijjah), three days of each month, and performing two Rak‘ahs (units of prayer) before noon."

The part of her statement stating: '… the first ten days (of Thul-Hijjah)' means fasting nine days or some of them because it is prohibited to fast on the 10th (day of 'Eed). As for what is common among people, particularly women, of specifying three days of Thul-Hijjah (the 7th, the 8th and the 9th) for fasting, this has no basis in the Sharee‘ah (Islamic legislation).

Eighth: The Udh-hiyyah (the 'Eed sacrifice)

It is a confirmed act of Sunnah for the person who can afford to offer it. Some scholars, such as Ibn Taymiyyah

are of the view that it is obligatory. Allah The Almighty commanded His Prophet

The verse includes the 'Eed prayer as well as the Udh-hiyyah. The Prophet

used to constantly perform it. It was narrated on the authority of Ibn ‘Umar

that he said, "The Prophet

stayed in Al-Madeenah for ten years and he did not abandon the Udh-hiyyah."

It is a strongly confirmed act of Sunnah. Some scholars are of the view that it is obligatory, and this view is very strong. Therefore, one should attend this prayer, listen to the Khutbah (sermon) and contemplate the rationale behind legislation of the 'Eed, and that it is a day for thanking Allah The Almighty and doing righteous deeds.