Hajj: An Obligation Once in a Lifetime 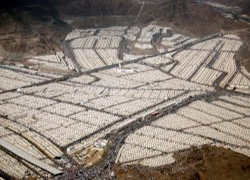 Religious obligations based on time take different forms: Some obligations are yearly, like fasting the month of Ramadan; others are weekly, like the Jumu'ah prayer, while others are daily, like the five daily prayers. However, there is an obligation that is only required once in a lifetime, which is the performance of Hajj (pilgrimage).

One might ask: Why was Hajj made obligatory only once in a lifetime? Is it to make things easy for people? This is possible, yet the fact that one cannot overlook is that many lessons can be learned from Hajj and that includes different great instructions that reform one's character.

If a Muslim acts upon these instructions and benefits from these lessons, they would suffice him from having to perform Hajj another time. If a Muslim performs Hajj the way he is supposed to and in a way that pleases Allah The Almighty, then he would not need to perform Hajj once more to learn or benefit from the lessons instilled in Hajj.

After performing that one obligatory time, it becomes only recommended to perform Hajj a second or a third time in order for these lessons to become engraved in his heart and become well founded therein; until these lessons become second nature, and he consequently becomes entitled to be showered with the Mercy of Allah and obtain the spiritual treasures.

Monotheism is an obvious feature of this act of worship from the time Allah The Almighty mandated it, and as it is noticed in its rites, from beginning to end. Allah The Almighty Says (what means): {And [mention, O Muhammad], when We designated for Abraham the site of the House, [saying], “Do not associate anything with Me and purify My House for those who perform Tawaaf and those who stand [in prayer] and those who bow and prostrate."} [Quran 22:26]

commented on this verse saying, "This means that monotheism was made a condition upon your father (Ibraaheem) and those who came after, and you are part of those addressed with the verse […] a pilgrim starts the rites of Hajj with monotheism by proclaiming; 'Labbayka Allahumma labbayk, Labbayka la Shareeka laka labbayk, inna al-hamda wan-ni‘mata laka wal-mulk la Shareeka lak (Here I am at Your service, O Allah! You have no partner. Here I am at Your service, O Allah. Verily, all the praise, the grace and the sovereignty belong to You. You have no partner).'"

A Muslim is encouraged to exert a lot of effort proclaiming the above-mentioned phrases and frequently mention Allah The Almighty during Hajj, especially "La Ilaaha Illallaah (None is worth of worship except Allah)." He is instructed to utter "Allahu Akbar (Allah is The Greatest)" every time he throws the pebbles throughout the 'Eed days. When the Muslim is about to depart and return to his home country, he is instructed to perform the farewell Tawaaf (circumambulation around the Ka'bah) and to mention Allah The Almighty abundantly and supplicate Him.

Therefore, the pilgrim starts his Hajj with pure monotheism and ends his Hajj with it. Sincerity is an essential condition for the acceptance of one's deed, and thus one is instructed to proclaim his Hajj saying: "Allahumma hajjatan la riyaa'a feeha wa la sum`ah" (O Allah, (enable me to perform) Hajj with no Riyaa' (show-off in the sense of desire that others witness one's good acts) or Sum`ah (show-off related to desire that others hear about one's good acts) in it."

*   Rafath (i.e., sexual intercourse or what leads to it from sayings or actions) and sins are things that prevent the slave from obtaining the hoped rewards of Hajj.

Allah The Almighty Says (what means): {Hajj is [during] well-known months, so whoever has made Hajj obligatory upon himself therein [by entering the state of Ihraam], there is [to be for him] no sexual relations and no disobedience and no disputing during Hajj….} [Quran 2:197]

said, "This verses instructs one to control his tongue and private parts from all prohibited matters and instructed him to refrain from sinning and disobedience. Although sinning and disobedience are prohibited before one goes in the state of Ihraam for Hajj, yet Allah stated the prohibition when talking about Hajj to highlight the sanctity of both Hajj and Ihraam, because sinning whilst in the state of Ihraam is graver and the punishment in such case is greater than sinning during other times."

It is not befitting for one to commit such vices whilst in the state of Ihraam (sacral state) and whilst performing such an honorable act of worship. A pilgrim refrains from such behavior as a way of purifying himself and reforming it, and as a means to elevate his soul and cultivate himself. All of this is done in order for the pilgrim to perfect his manners, purify his soul and reform his moral conduct.

The reward awaiting pilgrims: What a great reward awaits those who perform Hajj in the way that pleases Allah The Almighty… the great reward is the forgiveness of all previous sins. The pilgrim returns as sinless as the day he was born. One returns after having struggled and sacrificed and purified his soul from polytheism…after having dealt compassionately with the poor and the needy …after having refrained from evil and sins … indeed this entitles him to return as sinless as the day he was born, with a pure white record of deeds.

Commenting on the narration in which the Prophet

said: “Whoever performs Hajj for Allah and does not do Rafath nor commits sins (while performing Hajj), he will return as sinless as he was on the day he was born.” [Al-Bukhari] Ibn Hajar

said: "This entails forgiving all minor and major grave sins."

What a great reward indeed … a reward that cannot be measured … a reward worth more than the earth's fill of gold. A pilgrim should be prepared for these days and must be keen on purifying his record of deeds. Allah Says (what means): {The Day every soul will find what it has done of good present [before it] …..} [Quran 3:30]

Undoubtedly, Hajj is a school that teaches great lessons and that has countless benefits and one must take advantage of it and get the best he can out of it.