There is Neither Rafath (Sexual Relations), nor Disobedience nor Disputing During Hajj - I 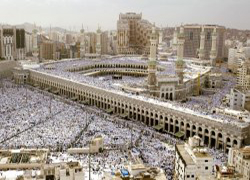 Allah The Almighty mentioned in His Noble Book of Hajj obligations, acts of the Sunnah (Prophetic tradition), etiquettes, pillars and favorable things that indicate His care for this great act of worship and glorious rite. He clarified this matter in detail, and with perfect clarification; Allah The Almighty Says (what means): {Hajj is [during] well-known months, so whoever has made Hajj obligatory upon himself therein [by entering the state of Ihraam], there is [to be for him] no Rafath (sexual relations) and no disobedience and no disputing during Hajj. And whatever good you do - Allah knows it. And take provisions, but indeed, the best provision is fear of Allah. And fear Me, O you of understanding.} [Quran 2:197]

In this Quranic Verse, Allah The Almighty pointed out the months of Hajj in which it is valid to assume Ihraam (sacral state) for Hajj, i.e. Shawwaal, Thul-Qa‘dah, and the first ten days of Thul-Hijjah, according to the correct opinion of scholars.

liked to dedicate those months to Hajj alone. That is why they disliked performing ‘Umrah during those months. This is narrated from ‘Umar, ‘Uthmaan, Ibn Mas‘ood

Allah The Almighty mentioned that whoever intended Hajj (by assuming Ihraam) has indeed made it binding upon himself, which requires him to abide by its restrictions and rulings according to the Quran and Sunnah (Prophetic tradition). In his comment on the following Statement of Allah The Almighty (what means): {…So whoever has made Hajj obligatory upon himself therein [by entering the state of Ihraam….] [Quran 2:197] Jareer

said, “There is consensus among the scholars that what is intended by obligation here is to make it due and compulsory upon oneself.”

According to Ash-Shaafi‘i and Ahmad

“Intention alone is sufficient to assume Ihraam for Hajj.”

That is, whoever makes Hajj or ‘Umrah due on him, let him avoid Rafath which means sexual relations as shown by the Statement of Allah The Almighty (what means): {….It has been made permissible for you the night preceding fasting to go to your wives [for sexual relations]…..} [Quran 2:187] This also includes foreplay such as touching, embracing, kissing, and so on. It also includes talking lewdly to a woman about sexual intercourse, like, “Once I remove Ihraam, I will have sexual relations with you, and do such and such with you.”

In this way, the term Rafath implies every kind of ill speech, lewdness, flirting with women, and talking about sexual intercourse.

No doubt, sexual intercourse is the Ihraam’s most grievous proscription that has the greatest negative effect on Hajj, and it has two cases:

When it is before the first stage of coming out of the state of Ihraam, i.e., before throwing Jamrat Al-‘Aqabah, shaving and performing Tawaaf Al-Ifaadhah on the day of Nahr; and it has two outcomes:

a)   The obligation of a ransom, which is a camel or a cow to be sacrificed and distributed entirely to the poor, and the worshipper should eat nothing thereof.

b)   The invalidity of the Hajj in which sexual intercourse takes place. But it has to be completed and compensated in the coming year without delay.

However, the Hajj would not be invalidated if any of the other proscriptions occurred.

The other case is when sexual intercourse takes place after the first stage of coming out of the state of Ihraam, i.e., after throwing Jamrat Al-‘Aqabah, shaving, and before performing Tawaaf Al-Ifaadhah, in which case, Hajj is valid, but two things are required according to the prominent opinion: that is, to go to the area that is beyond the borders of the Sanctuary and reassume his Ihraam, and to put on a set of Izaar (upper garment) and Ridaa’ (lower garment), and after that to perform Tawaaf Al-Ifaadhah while being in the state of Ihraam.

There Is Neither Rafath (Sexual Relations), nor Disobedience nor Disputing During Hajj - II