There is Neither Rafath (Sexual Relations), nor Disobedience nor Disputing During Hajj - II 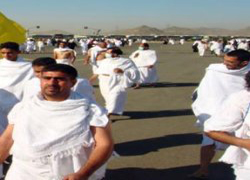 Disobedience is forbidden at all times, but it is even more forbidden during Hajj.

Disobedience is failing to obey Allah The Almighty, and to exceed His due limits. There is difference of opinion about what is meant by it in the Quranic Verse:

The first is to call each other offensive nicknames, as confirmed by Allah The Almighty in His Statement (what means): {...and do not call each other by [offensive] nicknames. Wretched is the name of disobedience after [one's] faith….} [Quran 49:11]

The second is to insult one another, due to the statement of the Messenger of Allah

: “Verily, insulting a Muslim is disobedience, and fighting with him is disbelief.” [Al-Bukhari and Muslim]

The third is to cause harm and be rude (to others). That is taken from the Statement of Allah The Almighty (what means): {…Let no scribe be harmed or any witness. For if you do so, indeed, it is [grave] disobedience in you. And fear Allah . And Allah teaches you….} [Quran 2:282]

The fifth, which is the correct opinion, is that the disobedience meant in the Noble Verse includes all sins. Ibn ‘Umar

According to Ibn Katheer

The correct opinion is that of those who say that disobedience includes all sins. Similarly, Allah The Almighty forbade injustice during the Sacred months, and although it is forbidden at all times, forbidding it during them is more confirmed. That is the significance of His Statement (what means): {…of these, four are sacred. That is the correct religion, so do not wrong yourselves during them….} [Quran 9:36] As regards the Sanctuary, Allah The Almighty Says (what means): {…and [also] whoever intends [a deed] therein of deviation [in religion] or wrongdoing - We will make him taste of a painful punishment.} [Quran 22:25]

It is proven from the Messenger of Allah

that he said: “He who performs Hajj, in which he neither has sexual relations nor commits sins, will come out as sinless as a newborn child just delivered by his mother.” [Al-Bukhari]

Disputation during Hajj is to fall into unnecessary useless quarrels and arguments about the rites of Hajj, which develops feelings of resentment and grudge. Allah The Almighty clarified those rites in detail, and any dispute or argument about them afterwards is of no significance. It is related that it was the habit of the Quraysh that whenever they gathered in Mina, some of them would say to each other, “Our Hajj is more perfect.” Others would say, “No, it is our Hajj that is more perfect.” It is reported that they used to argue with each other about the days of Hajj, and say, “Hajj is today (and not any other day).” Allah The Almighty forbade them to do so.

that they said, “Disputation during Hajj is to argue with your companion until you provoke his anger.” It is narrated on the authority of Ibn ‘Umar

that it means to curse and quarrel with each other. According to ‘Ikrimah

“It is to make a Muslim angry with you.”

When He The Almighty forbade them to do anything shameful, in word and deed, He Urged them to do what is good, and told them that He knows it well, and will give them the best reward for it on the Day of Judgment. Allah The Almighty Says (what means): {…And whatever good you do - Allah knows it….} [Quran 2:197] According to Al-Qurtubi

“It is to urge and encourage them to adhere to good in word rather than lewdness, and righteousness and piety in deed rather than disobedience and disputation.”

Allah The Almighty here commands (the pilgrims) to take provisions with them. It was revealed in connection with a group of Arabs who used to come to the House of Allah without provision, and say, “We are reliant on Allah: how should we come to perform Hajj to the House of Allah and He feeds us not?” In this way, they were dependent on people. But they were forbidden to do so, and rather commanded to take provision of flour, Saweeq (powdered barley), cake, and so on.

When He commanded them to take the worldly provision that sustains the body, He guided them to the provision of the Hereafter that sustains the heart, and clarified that it is the best and the most advantageous provision, as confirmed by His Statement (what means): {O children of Adam, We have bestowed upon you clothing to conceal your private parts and as adornment. But the clothing of righteousness - that is best…..} [Quran 7:26]