The Hajj of the Prophet, sallallaahu ‘alayhi wa sallam - I 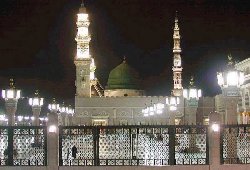 The Hadeeth (narration) of Jaabir may Allah be pleased with him, which draws for us the description of the Hajj of the Prophet,

, is a great Hadeeth on this topic and a cornerstone in clarifying the rulings of Hajj. This Hadeeth was narrated in full by Imaam Muslim in his Saheeh and was not narrated by Al-Bukhari in his Al-Jaami‘

Following is the full text of the Hadeeth as narrated by Muslim in his Saheeh:
Ja‘far bin Muhammad narrated on the authority of his father, saying, 'We went to Jaabir bin ‘Abdullaah and he began inquiring about the people (who had gone to see him) until it was my turn. I said “I am Muhammad ibn ‘Ali ibn Husayn.” He placed his hand upon my head and opened my upper button and then the lower one and then placed his palm on my chest, and I was, during those days, a young boy, and he said, “You are welcome, my nephew. Ask whatever you want to ask.” I asked him and he was a blind man.
When the time for prayer came, he stood up covering himself in his mantle. Whenever he placed its ends upon his shoulders they slipped down on account of it being short (in size). His Ridaa’ (upper garment) was, however, lying on the clothes rack near by. And he led us in the prayer. I said to him, “Tell me about the Hajj of the Messenger of Allah

.”
He motioned with his hand [to indicate the figure] nine, and then stated, “The Messenger of Allah

stayed in Al-Madeenah for nine years but did not perform Hajj, then a public announcement was made in the tenth year to the effect that the Messenger of Allah

was about to perform Hajj. A large number of people came to Al-Madeenah and all of them were anxious to follow the Messenger of Allah

and do according to his doing.
We set out with him until we reached Thul-Hulayfah. Asmaa’ bint ‘Umays gave birth to Muhammad bin Abu Bakr. She sent message to the Messenger of Allah

asking him, “What should I do?” He said: “Take a bath, bandage your private parts and put on Ihraam.” The Messenger of Allah, sallallaahu `layhi wa sallam,  prayed in the mosque and then mounted his she-camel and it stood erect with him on its back at Al-Baydaa’. And I looked as far as I could see in front of me but riders and pedestrians, and also on his right and on his left and behind him like this. And the Messenger of Allah

was among us and the (revelation) of the Quran was being sent down upon him. And it is he who knows (its true) interpretation. And whatever he did, we also did that.
He pronounced the Oneness of Allah (saying): "Labbayka Allahumma labbayk, labbayk la shareeka laka labbayk, inna al-hamda wan-ni‘mata laka wal-mulk la shareeka lak (Here I am at Your service, O Allah! You have no partner. Here I am at Your service, O Allah. Verily, all the praise, the grace and the sovereignty belong to You. You have no partner.)" And the people also pronounced the same Talbiyah but with some additions. The Messenger of Allah

did not reject anything of it, but he adhered to his own (wording of) Talbiyah .”
Jaabir, may Allah be pleased with him, said, “We did not have any other intention but that of Hajj only, being unaware of the 'Umrah (at that season), but when we came with him to the House, he touched the corner (the Black Stone) and (made seven circuits) walking at a fast pace in three of them and walking at a normal pace in four. He then went to the standing place of Ibraaheem, may Allah exalt his mention, (Abraham), and recited the verse (which means):{And take, [O believers], from the standing place of Abraham a place of prayer.} [Quran 2:125] And this standing place was between him and the House.
My father said (and as far as I know he mentioned it only on the authority of the Messenger of Allah

) that he recited in the two Rak‘ahs:{Say, "He is Allah, [who is] One,…}[Quran 112] and:{Say: O disbelievers...}[Quran 109] He then returned to the corner (the Black Stone) and kissed it. He then went out of the gate to As-Safa and as he reached near it he recited:{Indeed, As-Safa and Al-Marwa are among the symbols of Allah} [Quran 2:158] (adding:) I begin with what Allah the Almighty began with.
He first mounted As-Safa until he saw the House, and facing the Qiblah he declared the Oneness of Allah and glorified Him, and said: " Laa ilaaha illallaahu wahdahu la shareeka lahu, lahul mulku wa lahul hamdu, wa huwa ‘alaa qulli shay’in Qadeer. Laa ilaaha illallaahu wahdahu, anjaza wa‘dahu, wa nasara ‘abdahu, wa hazamal ahzaaba wahdahu (None is truly worthy of worship but Allah Alone, who has no partner. To Him belongs the dominion, to Him belongs all praise, and He has power over everything. He fulfilled His promise, gave victory to His servant, and defeated the confederates Alone.)”
He then made supplication in the course of that saying such words three times. He then descended and walked towards Al-Marwa, and when his feet came down in the bottom of the valley, he ran, and when he began to ascend he walked until he reached Al-Marwa. There he did as he had done at As-Safa. And when it was his last running at Al-Marwa he said: "If I had known beforehand what I have come to know afterwards, I would not have brought sacrificial animals with me and would have performed 'Umrah. So, he who among you has not the sacrificial animals with him should put off Ihraam and treat it as a 'Umrah."
Suraaqah bin Maalik bin Ju‘sham got up and said, “O Messenger of Allah, does it apply to the present year, or does it apply forever?” Thereupon the Messenger of Allah

intertwined the fingers (of one hand) into another and said twice: “The 'Umrah has become incorporated in the Hajj (adding): ‘No, but for ever and ever.’”
‘Ali, may Allah be pleased with him, came from Yemen with the sacrificial animals for the Prophet

and found Faatimah, may Allah be pleased with her, to be one among those who had put off Ihraam and had put on dyed clothes and had applied Kohl. He (‘Ali) showed disapproval to it, whereupon she said, “My father has commanded me to do this.”
He (the narrator) said that ‘Ali used to say in Iraq: I went to the Messenger of Allah

showing annoyance at Faatimah, may Allah be pleased with her,  for what she had done, and asked the (verdict) of the Messenger of Allah

then asked ‘Ali, may Allah be pleased with him: "What did you say when you undertook to go for Hajj?” ‘Ali said, “O Allah, I am assuming Ihraam for the same purpose as Thy Messenger has assumed it.” He said: “I have with me the sacrificial animals, so do not put off the Ihraam.”
He (Jaabir) said, “The total number of those sacrificial animals brought by ‘Ali,  may Allah be pleased with him, from Yemen and those brought by the Messenger of Allah

was one hundred. Then all the people except the Messenger of Allah

and those who had with them sacrificial animals, put off Ihraam, and got their hair shortened. When it was the day of Tarwiyah (8th of Thul-Hijjah) they went to Mina and put on the Ihraam for Hajj and the Messenger of Allah

rode and led the Thuhr, `Asr, Maghrib, ‘Ishaa’ and Fajr prayers there.
The Hajj of the Prophet

- II
The Hajj of the Prophet