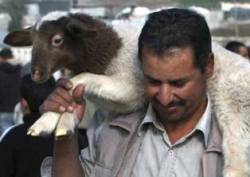 This is a Brief Account on the Udh-hiyah (sacrificial animal offered in ‘Eed Al-Adh-ha):

• The Udh-hiyah refers to animals classified as Al-An‘aam (camels, cattle, sheep or goats) that are slaughtered during the days of Nahr as an act of worship, with the intention of drawing closer to Allah The Almighty.

• The Udh-hiyah is one of the best acts of worship to be performed on ‘Eed Al-Adh-ha.

• Slaughtering the Udh-hiyah is prescribed in the Quran, the Sunnah (Prophetic tradition), and according to the consensus of the Muslim scholars. Allah The Exalted Says (what means): {So pray to your Lord and sacrifice [to Him alone].} [Quran 108:2] It is reported in Saheeh Al-Bukhari and Saheeh Muslim that the Prophet

sacrificed two white horned rams speckled with black. A group of scholars highlighted the consensus of the scholars in this regard such as Ibn Qudaamah

in his book Al-Mughni.

• Allah The Exalted prescribed sacrificing the Udh-hiyah for certain reasons, some of which are commemorating and following the example of Prophet Ibraaheem (Abraham)

celebrating the collective joy on ‘Eed Al-Adh-ha, feeding the poor and needy, and imitating the pilgrims in some of the rites of Hajj.

• According to the correct opinion of scholars, sacrificing the Udh-hiyah is a confirmed act of the Sunnah (Prophetic tradition) and there is no explicit Hadeeth that indicates its obligation. Had offering the Udh-hiyah been obligatory, Abu Bakr and ‘Umar

reported an unauthentic Hadeeth, though its chain of narration is authentic, that the Prophet

said: “Every household should slaughter a sacrificial animal each year.” Another Hadeeth, which does not state an explicit ruling, reads: “Whoever can afford to offer a sacrifice but does not do so, let him not approach our place for prayer.”

There are four conditions for the Udh-hiyah:

1)  It should be one of the An‘aam class of animals, which are: camels, cattle, sheep and goats.

2)  It should be free of any physical defects that would render it unsuitable for sacrifice. These faults, which invalidate the sacrifice, were mentioned in the Hadeeth that was narrated by Al-Baraa’ ibn ‘Aazib

who said, “The Prophet

stood up among us and said: ‘There are four (types of animals) which are not permissible for sacrifice: A one-eyed animal which has obviously lost the sight of one eye, a sick animal which is obviously sick, a lame animal which is obviously lame, and an emaciated animal whose legs have no marrow.’”  [Ahmad, Abu Daawood, At-Tirmithi, An-Nasaa’i and  Ibn Maajah] Blind or disabled animals are more likely to be unsuitable for sacrifice more than those that are one-eyed and lame. Obvious lameness, which renders the animal unsuitable for sacrifice, is what prevents the animal from walking normally and catching up with the herd. Other imperfections and milder defects do not invalidate the sacrifice or disqualify the animal.

3)  It should have reached the age stipulated in Sharee‘ah, which is five years for camels, two years for cows, a year for goats and six months for sheep.

4)  It should be slaughtered at the time specified in Sharee‘ah, which starts after the ‘Eed prayer until sunset on the last of the days of Tashreeq, which is the 13th of Thul-Hijjah.

• He who intends to offer the sacrificial animal should refrain from removing anything from his hair, nails or skin from the first day of Thul-Hijjah until he slaughters the Udh-hiyah.

• Slaughtering the Udh-hiyah is better than giving out its monetary value for charity.

• Seven people can share one cow or camel as Udh-hiyah.

• If a defect happens (unexpectedly) to the Udh-hiyah, without negligence on the part of the owner, it is still considered suitable for sacrifice.

• One may borrow money to buy the Udh-hiyah as long as he can afford to repay his debt.

There are certain etiquettes one must abide by when slaughtering an animal for a sacrificial offering, some of which are:

1)  He should face the Qiblah (direction of prayer) with the animal at the time of slaughtering it.

2)  He should make it comfortable, sharpen his knife, and quickly and firmly passing a sharpened blade over the neck area.

3)  The blade should be concealed from the view of the animal when sharpening it.

4)  It is part of the etiquette of slaughtering also not to slaughter one animal in front of another.

5)  One should not hasten in breaking its neck or skinning it.

• Among the religious innovations is performing ablution for the sacrificial animal, wiping one’s hands over it from head to tail on the eve of ‘Eed, and putting some of its blood on the threshold of the house or on the foreheads of one's children.