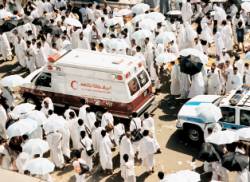 Hajj is a unique Islamic season when more than two million Muslims from all over the world gather in one place for several weeks. There is no doubt that Hajj imposes certain demands on the one who performs it. There are the hardships of travel, walking while performing religious rites, fluctuations of the weather in Makkah and Madeenah during summer, and so on.

Your diet during Hajj