Hajj: A Training School for Sound Morals - I 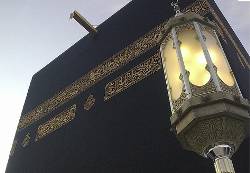 Allah The Almighty Says (what means): {And [mention, O Muhammad], when We Designated for Ibraaheem (Abraham) the site of the House, [saying], "Do not associate anything with Me and purify My House for those who perform Tawaaf and those who stand [in prayer] and those who bow and prostrate." And proclaim to the people the Hajj; they will come to you on foot and on every lean camel; they will come from every distant pass. That they may witness benefits for themselves and mention the name of Allah on known days over what He Has Provided for them of [sacrificial] animals. So eat of them and feed the miserable and poor. Then let them end their untidiness and fulfill their vows and perform Tawaaf around the ancient House.} [Quran 22:26-29]

{Do not associate anything with Me} This verse plainly clarifies the great rule upon which the Sacred and that this House was built for worshipping Allah Alone.

Then, Allah The Almighty ordered Ibraaheem

to proclaim the obligation of pilgrimage to all people and call them visit the Sacred House. Allah The Almighty promised Ibraaheem

The promise is still being fulfilled from the days of Ibraaheem

until this moment and will remain so in the future. People’s hearts – whether they are rich or poor – long for the Sacred House and desire to see it and perform Tawaaf around it.

Then, the verse sheds light on some features and goals of Hajj as Allah The Almighty Says (what means): {That they may witness benefits for themselves….} [Quran 22:28] These benefits include religious, political, economic, cultural, social and literary benefits.

Trade is the first Worldly benefit of Hajj:

Merchants and traders find an active market in the Hajj season where goods from all over the world are brought to this Holy Land. Pilgrims come from distant parts of the world bringing some goods from their countries making an annual international market for trade. Therefore, Allah The Almighty Says (what means): {There is no blame upon you for seeking bounty from your Lord [during Hajj]…..} [Quran 2:198] This indicates the trade that does not violate the original intention of Hajj. However, if preoccupation with trade results in a deficiency in the performance of the Hajj rituals, it becomes disliked or even unlawful in proportion to the magnitude of the deficiency.

Knowing other Races is one of Hajj benefits:

Allah The Almighty made Hajj an annual global conference where all races and peoples meet in various places to perform the rituals. The old, the young, the rich and the poor see each other. They may gather around the Ka‘bah, Zamzam, between As-Safa and Al-Marwah, in markets and residential places, on the way to Mina, in ‘Arafat, Muzdalifah, Al-Khayf Mosque, and so on. Allah The All-Knowing, The All-Wise made these movements for the purpose of meeting and knowing each other even at the time of throwing pebbles. Allah The Almighty Says (what means): {O mankind, indeed We have created you from male and female and made you peoples and tribes that you may know one another. Indeed, the most noble of you in the sight of Allah is the most righteous of you. Indeed, Allah Is Knowing and Acquainted.} [Quran 49:13] A pilgrim should utilize this opportunity in this large gathering that brings about benefits in various walks of life.

Humbleness is one of the benefits of Hajj:

You cannot distinguish from the unified look, chant and clothes of Hajj the rich from the poor and the ruler from the ruled, and so on. The Prophet

said: “Whoever refrains from dressing (in fancy, expensive clothes) out of humility towards Allah, even though he is able to do so, Allah will call him on the Day of Resurrection before His creation and will give him the choice of whatever garment of faith he wishes to wear.” [Ahmad and At-Tirmithi] All pilgrims move from one place to another making the earth their mattress and the sky their cover. Hence, no one looks down on the other. The Prophet

said: “Allah revealed to me that 'You should be humble so that you would not boast to each other.” [Ibn Maajah]