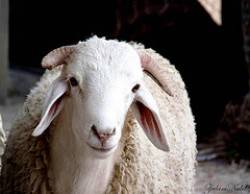 If a person bought a sheep and it fell and broke its foot without negligence on his part, it is permissible to slaughter it and it will be sufficient for him. However, if it was broken as a result of something that he did such as tying it too tightly or out of negligence, he must replace it with a similar one.

What should be done with Udh-hiyah?

You have the right to eat from your Udh-hiyah, and give some of the meat to your relatives and neighbors and the poor people. Allah The Almighty Says (what means): {…So eat of them and feed the miserable and poor.} [Quran 22:28]

said: “Eat and save, and give in charity.” In another narration he said: “Eat, feed and save.” [Al-Bukhari] The exact amount of each part was not specified in the verse or in the Hadeeth. Thus, it is favorable to divide the slaughtered sacrifice into three parts; he may eat one third, give one third as charity and give one third as a present. This is recommended and not obligatory. It is prohibited to sell any part of the slaughtered animal such as the meat, fat, skin and so forth because this money is given as charity so, it is impermissible to sell any of it. It is also impermissible to give the butcher any part of the sacrifice for his fees but it is permissible to give him something as a present or as charity.

mentioned as she narrated that the Prophet

said: “When you see the new moon of Thul-Hijjah, if any one of you wants to offer a sacrifice, then he should stop cutting his hair and nails until he offers his sacrifice.” According to another narration the Prophet

said: "He should not remove anything from his hair or skin.”

and he should ask for the forgiveness of Allah The Almighty, but this cutting does not affect the acceptance of his sacrifice.

If someone needed to cut some of his hair or nails because of being wounded or because his nail was broken and he needs to cut it or cut part of his skin that harms him, it is alright to do so. It should be noted that this ruling includes the one who wanted to slaughter a sacrifice for himself or on behalf of another person, but the one who was assigned as a proxy by another person by virtue of authorization or a will is not included in this ruling.

The people on whose behalf the sacrifice is slaughtered are not required to refrain from cutting their hair or nails. The proof of this is that the Prophet

used to offer a sacrifice on behalf of his family (the family of Muhammad) and it was not narrated that he used to forbid them from cutting their hair or nails.

Fulfill this great rite and do not be among those who are deprived; who spend a lot and slaughter sacrifices all the year, but who become lazy when the time of ‘Eed comes. Be keen on doing good and righteous deeds such as maintaining kinship ties, visiting relatives, abandoning hatred, envy and grudges as well as purifying your heart, being kind to the poor, the needy and the orphans by helping them and making them happy.