Virtue of the Days of At-Tashreeq - II 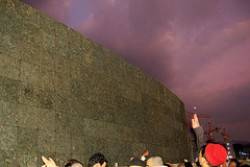 On these blessed days, it is affirmed to make Takbeer after every obligatory prayer, and the unrestricted Takbeer at all times until sunset of the 13th of Thul-Hijjah, and this applies to pilgrims and others as well.

used to recite Takbeer on those days in Mina after the obligatory prayers, on his bed, in his tent, when he was sitting and when he was walking. Maymoonah

on the Days of Tashreeq along with men in the mosque. [Al-Bukhari]

Scholars affirmed the importance of reciting Takbeer after prayers to the extent that they said: One has to make up for the Takbeer if he forgets it; if he forgets to say Takbeer after the prayer, he should say it whenever he remembers even if he had Hadath (i.e., ritual impurity) or went out of the mosque as long as a long time did not pass between the prayer and Takbeer. Additionally, the unrestricted Takbeer is also prescribed in the marketplaces, houses, mosques, and roads as a way of Glorifying and Exalting Allah The Almighty and demonstrating the rituals of His religion.

On the Days of At-Tashreeq, spiritual and physical happiness are combined for the believers; they are physically pleased with eating and drinking and spiritually pleased with the remembrance and thanking of Allah The Almighty. Thus, the blessing is perfected. Whenever they show gratefulness to their Lord for such blessings, their gratefulness itself is another blessing that entails more gratefulness. In this way, expressing their gratitude never comes to an end.

The Hadeeth of the Prophet

This is especially so for the blessing of eating from the meat of the animals as prescribed in the Days of At-Tashreeq. Such animals never disobey Allah The Almighty and they are glorifying and submissive to Him as Allah The Almighty Says (what means):

·        {And to Allah prostrates whatever is in the heavens and whatever is on the earth of creatures, and the angels [as well], and they are not arrogant.} [Quran 16:49]

·        {….Do you not see that to Allah prostrates whoever is in the heavens and whoever is on the earth and the sun, the moon, the stars, the mountains, the trees, the moving creatures and many of the people? But upon many the punishment has been justified…..} [Quran 22:18]

Rather, such animals may remember Allah The Almighty much more than some humans. It was narrated in a Hadeeth Marfoo‘ that the Prophet

said: "An animal may be better than its rider and it may remember Allah much more than him." [Ahmad]

Allah The Almighty stated in His Noble Quran that many of the Jinn and humans are like animals or rather farther astray. Allah The Almighty allowed His faithful worshipers to slaughter these animals to make them physically strong and spiritually pleased by eating their meat for it is one of the best and most delicious kinds of food. Although bodies can grow without meat, by consuming plants and so on, one's strength, mind, and pleasure cannot be complete except with eating meat. Thus, Allah The Almighty made it permissible for His faithful believers to slaughter such animals and eat their meat so that they may have strength and sound minds. This, in turn, will make them able to gain beneficial knowledge and do righteous deeds that distinguish them from animals, and doing so will also help them remember Allah. Thus, they should show gratitude to Him for such blessings and use them in obeying and worshiping Allah The Almighty for He has made the children of Adam superior to many other creatures and subdued those animals to them. Allah The Almighty Says (what means): {Then eat from them and feed the needy and the beggar. Thus have We subjected them to you that you may be grateful.} [Quran 22:36]