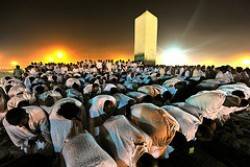 As for subjecting such animals, Allah Says (what means): {And the camels and cattle We have appointed for you as among the Symbols of Allah; for you therein is good. So mention the Name of Allah upon them when lined up [for sacrifice]; and when they are [lifeless] on their sides, then eat from them and feed the needy and the beggar. Thus have We subjected them to you that you may be grateful.} [Quran 22:36]

The Statement of Allah The Almighty (what means): {Thus have We subjected them to you that you may be grateful} means, for this reason We have subjugated them to you i.e., We Have Made them submissive to you, so that if you wish you can ride them, or if you wish you can milk them, or if you wish you can slaughter them. Allah The Almighty Says (what means): {Do they not see that We have created for them from what Our hands have made, grazing livestock, and [then] they are their owners? And We have tamed them for them, so some of them they ride, and some of them they eat. And for them therein are [other] benefits and drinks, so will they not be grateful?} [Quran 36:71-73]

Allah The Almighty prescribed slaughtering sacrifice for you so that you will remember Him at the time of slaughtering, for He is the Creator and Provider. Nothing of its flesh or blood reaches Him, for He has no need of anything other than Himself. During the pre-Islamic era, when they offered sacrifices to their gods, they would put some of the meat of their sacrifices on their idols, and sprinkle the blood over them, so Allah The Almighty Says (what means): {Their meat will not reach Allah, nor will their blood.} [Tafseer ibn Katheer]

Days of At-Tashreeq and the Bliss of Paradise:

The prohibition of fasting on the Days of At-Tashreeq after the righteous deeds in the ten days of Thul-Hijjah for the one who did not perform Hajj and after the deeds of Hajj, and enjoying what Allah The Almighty has permitted, resembles the condition of the believers in the worldly life. Life is a journey, just like the days of Hajj. It is like the time of assuming Ihraam in which the believer refrains from what Allah The Almighty forbade him; following his desires. Thus, whoever shows forbearance during his journey and curbs his desires and then his journey ends and he reaches his desired aim, has completed his prescribed duties and performed his vows, and all of his days will be like the days of Mina i.e. days of eating, drinking and remembering Allah The Almighty. He will enjoy the hospitality of and nearness to Allah The Almighty forever. Therefore, it will be said to the people of Paradise (what means): {[They will be told], "Eat and drink in satisfaction for what you used to do.} [Quran 52:19] and, {[They will be told], "Eat and drink in satisfaction for what you put forth in the days past.} [Quran 69:24]

In conclusion, the Muslims must fear Allah The Almighty and adorn and enrich their times with the remembrance of Allah The Almighty, thanking Him and fulfilling all that He enjoined. Just as these blessed days will pass by the good doer and the evil one in spite of the great difference between their deeds, this world will also pass by everyone; neither advancing the good doer before his appointed time nor delaying the evil doer to repent. Rather, when their term is reached, neither can they delay it nor can they advance it an hour. However, the obedient person always forgets the hardship of fulfilling acts of worship, patience concerning them and patience to keep away from desires when he tastes the sweetness of the reward. In the same way, the disobedient person forgets the sweetness of desires and tastes the bitterness of the evil deeds that were written against him when he neglected his obligations and committed sins.