Etiquettes of Visiting the Prophet's Mosque 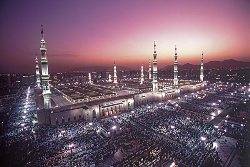 *  It is permissible to set out on a journey with the intention of praying in the Prophet’s Mosque at any time, as Abu Hurayrah

said: “One prayer in my Mosque is better (in reward) than one thousand prayers elsewhere, except in the mosque of Makkah (i.e., the Haram).” [Al-Bukhari and Muslim]

*  Travelling to pray in the Prophet’s Mosque is unrelated to Hajj, and therefore it is not one of the recommended acts during Hajj, nor is the Hajj incomplete without it.

*  It is Sunnah (Prophetic tradition) that one enters the Prophet’s Mosque (or any other mosque) with the right foot first whilst saying the following supplication: “Bismillaah, wassalaatu wassalaamu ‘ala Rasoolillaah. Allahumma Ighfir lee waftah lee abwaaba rahmatik.” (In the name of Allah, may Allah send peace upon His Messenger and exalt his mention, O Allah forgive my sins and open your gates of mercy for me), then say, ‘A’oothu Billaahi al-‘Atheem wabi wajhihi al-Kareem wabi Sultaanihi al-Qadeem min ash-shaytaani ar-rajeem’ (I take refuge with Allah, The Supreme, and with His Noble Face, and His eternal authority from the accursed devil).

*  One should pray two Rak’ahs (units) before sitting down, as a greeting to the mosque.

*  It is recommended to visit the grave of the Prophet

and greet him and his two Companions (Abu Bakr and ‘Umar

used to when he visited them upon arrival from a journey. It is alright to add more supplications occasionally, as long as this does not become a common practice.

*  It is also recommended to visit the mosque of Qubaa’ in Madeenah and pray any prayer in it, because the Prophet

said: “Anyone who performs Wudhoo’ in his house then goes to Qubaa’ and prays two Rak'ahs there, will get the reward of an ‘Umrah.” [Ahmad and An-Nasaa’i]

used to visit their graves

and supplicate for them. The Prophet

said: “I had forbidden you from visiting the graves before, but now you may visit them.” [Muslim] The Prophet

taught his Companions to say when they visited the graveyard: “As-salaamu ‘alaykum ahl ad-diyaar al-mu’mineen wa al-minalmuslimeen, wa innaa in shaa’ Allahu bikum laahiqoon, nas’alullaaha lanaa wa lakum al-‘aafiyah.” (Peace be upon you, O inhabitants of the graves, amongst the believers and the Muslims. Indeed, we soon will be united with you, Allah willing; we ask Allah for your well-being and ours).” [Muslim]

*  It must be known that building domes or mosques over graves, or burying the dead inside a mosque is one of the major prohibitions which the Prophet

warned against in many texts:

said in his last sickness: “May Allah curse the Jews and the Christians, they made the graves of their Prophets places of prayer.” [Al-Bukhari and Muslim]

forbade people from plastering a grave, sitting on it or building (a structure) over it.” [Muslim]

said: “Do not sit on the graves nor pray in their direction.” [Muslim]

Regarding the presence of the Prophet’s grave inside his Mosque today, it must be known that the Prophet

was not buried inside the Mosque, but rather in the room of ‘Aa’ishah

and Prophets are to be buried in the place where they die. The room was outside the mosque and this continued to be the case until all the Companions in Madeenah died. Ideally, there should never have been any expansion towards the side of the grave of the Prophet

so that the grave could have remained outside the precincts of the mosque; when ‘Uthmaan