Great Benefits of a Great Obligation 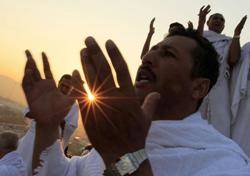 Allah The Almighty has sanctified Makkah, protected it and bestowed men, animals and plants with complete security within the borders of its sanctuary. Allah The Almighty Says (what means): {Indeed, the first House (of worship) established for mankind was that at Bakkah (i.e., Makkah) – blessed and a guidance for the worlds. In it are clear signs (such as) the standing place of Abraham. And whoever enters it (i.e., the Haram) shall be safe. And (due) to Allah from the people is a pilgrimage to the House – for whoever is able to find thereto a way. But whoever disbelieves (i.e., refuses) – then indeed, Allah is free from need of the worlds.} [Quran 3:96-97]

Hajj, which is greater than any other social gathering, was ordained as a means of uniting all the brothers in faith. They assemble there in answer to the call of Prophet Ibraaheem

ed, whom Allah The Almighty commanded thus (what means): {…Do not associate anything with Me and purify My House for those who perform Tawaaf (circumambulation of the Ka’bah) and those who stand (in prayer) and those who bow and prostrate. And proclaim to the people the Hajj (pilgrimage); they will come to you on foot and on every lean camel; they will come from every distant pass – That they may witness (i.e., attend) benefits for themselves and mention the name of Allah on known (i.e., specific) days over what He has provided for them of (sacrificial) animals. So eat of them and feed the miserable and poor.} [Quran 22:26-28]

Hajj has countless benefits which all aim at improving one’s life in this world and the next, elevating the Ummah (Muslim nation) and winning the pleasure of Allah The Almighty. Hajj promotes solidarity amongst Muslims, unites them and mends the broken relationships between them. This is important, as it preserves the Islamic brotherhood that is highly extolled and blessed by Allah The Almighty, Who Says (what means): {The believers are but brothers….} [Quran 49:10] Strengthening this brotherhood is what keeps the Ummah united so it can stand strong and formidable in the face of tribulations and in order to achieve glory, power and succession in the land, as promised by Allah The Almighty, when He Says (what means): {Allah has promised those who have believed among you and done righteous deeds that He will surely grant them succession (to authority) upon the earth just as He granted it to those before them and that He will surely establish for them (therein) their religion which He has preferred for them and that He will surely substitute for them, after their feat, security, (for) they worship Me, not associating anything with Me. But whoever disbelieves after that – then those the defiantly disobedient.} [Quran 24:55]

Fear Allah The Almighty during your Hajj and focus on its main goal. Endeavor to make the best of it by witnessing the actual benefits of Hajj that are embodied in acts of worship. This will bring you closer to your Lord and promote unity among Muslims, consequently removing the feelings of aggression that Muslims are now experiencing in many countries. Allah Says (what means): {Hajj is (during) well-known months, so whoever has made Hajj obligatory upon himself therein (by entering the state of Ihraam), there is (to be for him) no sexual relations and no disobedience and no disputing during Hajj. And whatever good you do – Allah knows it. And take provisions, but indeed, the best provision is fear of Allah. And fear Me, O you of understanding.} [Quran 2:197]

One should ponder and contemplate over the benefits of Hajj. Allah The Almighty Ordained Hajj and ordered Ibraaheem

to proclaim it amongst people so they could witness its benefits. Otherwise, how could the Ummah hope to achieve its objectives if it turns away from them?