Sequence of the Rituals of Hajj and ‘Umrah - I 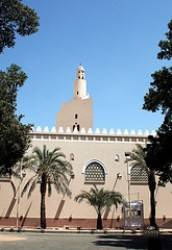 On reaching the Meeqaat (the location that a pilgrim should not pass without assuming Ihraam), you should take a bath and apply scent to your body, including (for men) the head and beard. You should then assume Ihraam (sacral state) for ‘Umrah intending Tamattu’ (performing ‘Umrah then waiting to perform Hajj) and walk to Makkah pronouncing the Talbiyah (saying "Labbayka Allahumma Labbayk, Labbayka La Shareeka Laka Labbayk, Innal-Hamda Wan-Ni’mata Laka Wal-Mulk La Shareeka Lak" I respond to Your call O Allah, I respond to Your call, and I am obedient to Your orders, You have no partner, I respond to Your call. All the praises and blessings are for You, all the sovereignty is for You, and You have no partners with you.)

When you reach the Ka’bah, you should do Tawaaf (circumambulation) around it seven times. You should know that the entire Sacred Mosque is a place for Tawaaf, no matter whether you are close to the Ka’bah or not. However, Tawaaf close to the Ka’bah is preferable, as long as you are not harmed by the crowds. If there are large crowds you may make Tawaaf far from the Ka’bah and. After making Tawaaf, you should offer two Rak’ahs behind Maqaam (station) of Ibraaheem

either near the Ka’bah or far from it. The most important thing is to be in place between the Ka’bah and the Maqaam. You should then make Sa’y (walking seven times between As-Safa and Al-Marwah) beginning with As-Safa. When you finish the seven courses, you should shave the head entirely or trim your hair equally from all parts of the head (for men), contrary to what is done by many people now who cut hair from one side of the head only.

On the eighth of the month of Thul-Hijjah, you bathe and apply scent to your body in preparation for Ihraam for Hajj. You should resume Ihraam right from where you are staying. You should then go to Mina, where you should perform the Thuhr, ‘Asr, Maghrib, ‘Ishaa’ and Fajr prayers. All four Rak’ah prayers should be shortened but not combined, as this was the conduct of the Prophet

. At sunrise on the Day of ‘Arafah, you should march to ‘Arafah, pronouncing Talbiyah solemnly and with submissiveness. When you reach ‘Arafah, you should combine the Thuhr and ‘Asr prayers, performing each as two Rak’ahs at the time of Thuhr. You should then devote yourself to supplicating to  Allah The Almighty. While doing this you should be in the state of Wudu’ and facing the Qiblah.

You should take care regarding the precincts of ‘Arafaat and its landmarks; a common mistake that many pilgrims make is that they stand outside its boundaries. Whoever does not stand within ‘Arafaat, his pilgrimage will be defective. The Prophet

said: “Hajj is (the Day of) ‘Arafah.” A pilgrim may stand at any place on the plain of ‘Arafaat, east, west, north or south, except the bottom of the valley of ‘Urnah. The Prophet

said: “I stand here and the entire ‘Arafah is a standing place.”

At sunset, you should rush to Muzdalifah, pronouncing Talbiyah with humility and as quietly as you can. This is according to the command of the Prophet

. When he rushed from ‘Arafaat, he straightened the bridle of his she-camel, bending her neck until her head was about to reach his saddle, and saying: “O people! Tranquility! Tranquility!” When you reach Muzdalifah, you should perform the Maghrib and ‘Ishaa’ prayers then spend the night there until the dawn. The Prophet

did not permit anyone to leave Muzdalifah before the dawn except the weak, who were permitted to leave at the end of the night.

Sequence of the Rituals of Hajj and ‘Umrah - II