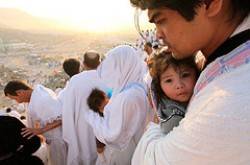 Today’s civilization, more accurately the shockingly materialistic modern civilisation, propagates its own set of principles regarding human rights. It is a fact that these rights are weak, deficient and geared only towards greed, even at the expense of religion and morals. Moreover, these rights are not underpinned by faith, nor is there any belief behind them that would revive them, nor any enforceable legislation that would protect them. Consequently, one sees them being violated in the world’s most materialistically advanced civilizations, the very places from which they were first propagated! Where are these human rights when Jerusalem is being occupied, the sanctity of Al-Aqsaais beingviolated, its people’s wealth confiscated and their blood spilt for so many decades? Where are the human rights in a war being waged that is not based on principles, is inhumane and flagrantly destroys the very notion of human rights?
The Prophet, sallallaahu ‘alayhi wa sallam said during his sermon during the Farewell: “All matters from Jaahiliyyah (The pre-Islamic era) are under my foot (i.e. valueless).”[Muslim]
During the Jaahiliyyah (the Period of Ignorance before Islam)bloodshed was taken lightly and acts of violence and brutality were conducted in a business-like manner. Initiating wars was a common practice at that time. People were left without guidance, with no divine message or faith to purify and regulate them. Then Islam came to change and uplift their principles and to use these as a basis to govern all areas of life. Islam emphasised the sanctity of human life and made murder a crime against humanity. Allah The Almighty Says (what means): {We decreed upon the Children of Israel that whoever kills a soul - unless it be for murder or for spreading mischief in the land - it is as if he had slain mankind entirely}[Quran, 5: 32]
Before the arrival of Islam, tribalism was deeply rooted in society and well structured. Then the Prophet, sallallaahu ‘alayhi wa sallam worked to eliminate all the prejudice and racism which people lived with, praised and boasted of. Stressing this point in his speech, he, sallallaahu ‘alayhi wa sallam said: “All of you descend from Aadam and Aadam was created from clay; The most honourable amongst you in the sight of Allah are the most pious. There is no preference for an Arab over a non-Arab, a non-Arab over an Arab, a coloured person over a white person or a white person over a coloured person except based on piety.” [Al-Bayhaqi, Ahmad and others]Therefore, a person’s colour, wealth, worldly position and lineage are not to be taken into consideration when evaluating them, because these are things granted by Allah The Almighty and they were not given any choice on whether to accept these or not. Allah The Almighty says (what translates as): {Indeed, the most noble of you in the sight of Allah is the most righteous of you}[Quran, 49: 13]
Nowadays it is distressing to see some people amongst the Muslims trying to revive the tribalism and racism of the Jaahiliyyah, boasting about it and trying to spread its evil, although the Messenger of Allah, sallallaahu ‘alayhi wa sallam said: “Abandon it (tribalism and racialism), for it is foul.”[Al-Bukhari and Muslim]
He, sallallaahu ‘alayhi wa sallam further said: “The first Riba (interest-based transaction) I cancel is that of Al-‘Abbaas ibn Al-Muttalib (his uncle) - I cancel it all.” [Muslim]Allah The Almighty forbade Riba because of its great harm and evil; it ruins man’s conscience and corrupts societies. This is because it causes greed, selfishness and avarice to spread. It also kills community spirit, causes enmity between people and puts hatred of each other in their hearts. For all these reasons, Allah The Almighty declared war against all those who deal with Riba and spread it. The war in this life is the alarming phenomenon of widespread inflation of prices, financial crises, psychological problems and the deprivation of the sense of mutual cooperation and sacrifice. As for the Hereafter, the war is in the form of a painful punishment. Allah The Almighty Says (what means): {Those who consume interest cannot stand (on the Day of Resurrection) except as one stands who is being beaten by Satan into insanity}[Quran, 2: 275]
The Riba-based financial system of the world is what is responsible for many of the financial and economical crises that have overwhelmed individuals, communities and countries in recent history.
(To be continued)