The Many Virtues of Hajj - I 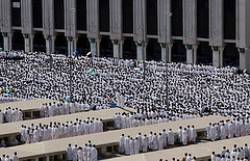 There are numerous Ahadeeth (narrations) that talk about the virtues of Hajj and its great reward. Some of these are:

said: “From one ‘Umrah to another is an expiation for the sins committed between them, and the accepted Hajj has no less a reward than Paradise.” [Al-Bukhari and Muslim]

“‘O Messenger of Allah, can we not go out on campaigns and fight in Jihaad with you?’ He said: ‘But the best and most beautiful of Jihaad is an accepted Hajj.’ ‘Aa’ishah

said, ‘I never stopped going for Hajj after I heard that from the Messenger of Allah

said: “Hajj wipes out whatever (sins) came before it.” [Muslim]

said: “Keep on doing Hajj and ‘Umrah, for they eliminate poverty and sin just as the bellows eliminate impurities from iron, gold and silver.” [At-Tirmithi, An-Nasaa’i]

said: “The one who fights for the Sake of Allah and the pilgrim who goes for Hajj or ‘Umrah are all guests of Allah. He called them and they responded; they ask of Him and He will give them.” [Ibn Maajah]

Allah The Almighty Himself Says (what means): {That they may witness (i.e., attend) benefits for themselves…} [Quran 22:28] The benefits of Hajj are both worldly and religious (spiritual). As for the latter, the one who goes for Hajj earns the pleasure of his Lord and comes back with all his sins forgiven. He also earns immense reward, which he cannot earn in any other place. For instance, one prayer in Al-Masjid al-Haraam (i.e., the Sacred Mosque in Makkah), is equal to a hundred thousand prayers elsewhere, and Tawaaf (circumambulation of the Ka’bah) and Sa’y (pacing between Safa and Marwah) cannot be done anywhere else. Other benefits include meeting other Muslims and discussing their circumstances, encountering scholars and learning from them and asking them about one’s problems. Worldly benefits include trade and business, as well as other kinds of earnings related to Hajj.

Some Examples of the Wisdom behind some of the Rituals of Hajj are:

*     When the pilgrim travels for Hajj, he leaves his near and dear ones behind as well as his homeland, which reminds him of his final journey to Allah The Almighty and the Hereafter.

*     Traveling is tiring, and this is also true of the journey to the Hereafter – only on a much greater scale. Man goes through various stages of existence: there is the stage of his passing away, the grave, the gathering, the accounting, the scales and As-Siraat (a bridge that will be laid across Hellfire, for people to pass over on the Day of Judgment), followed by either Paradise or Hell. The only ones who truly blessed are those whom Allah The Almighty saves.

*     When the pilgrim puts on the two garments of his Ihraam (the state of a pilgrim in which he performs Hajj and ‘Umrah, and during which he is prohibited from certain acts that are lawful otherwise), he is reminded of the shroud in which he will be wrapped after he dies. This prompts him to give up disobedience and misdeeds. Just as he gives up his regular clothing (for Hajj), likewise he should give up sins. Just as he has put on two clean, white garments, he has to cleanse his heart and make it clean and pure, and guard his senses so they remain uncorrupted, uncontaminated and unsullied by sins and disobedience.

The Many Virtues of Hajj - II