The Rulings of Hajj 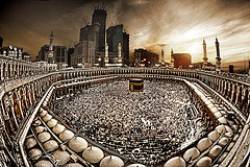 in all the rites of Hajj, for he said: “Take your Hajj rites from me.” [Muslim] The Prophet

also said: “Whoever performs Hajj and does not engage in sexual relations nor acts sinfully, he will return (after Hajj free from all sins) like (he was) the day his mother gave birth to him.” [Al-Bukhari and Muslim] He also said: “Performing ‘Umrah after ‘Umrah will erase the sins committed between them and the well-performed Hajj has no reward but Paradise.” [Al-Bukhari and Muslim] A good Hajj is one that is done with sincerity, according to the Prophet’s guidance and in which one abstains from sins and harming other Muslims.

The pilgrim should be aware of the rituals of Hajj and its pillars. The pillars of Hajj are:

*  Tawaaf Al-Ifaadhah (circumambulation of the Ka’bah on the tenth day of Thul-Hijjah).

*  Sa’y (pacing) between As-Safa and Al-Marwah.

*  Standing at ‘Arafah till sunset.

*  Passing the night at Muzdalifah.

*  Pelting the stones, shaving or cutting of the hair.

*  Spending the nights at Mina.

*  Sacrificing an animal if necessary (according to the type of Hajj one is performing).

On the day of slaughtering, the 10th of Thul-Hijjah, the pilgrim pelts the Jamrat Al-‘Aqabah with stones, slaughters, performs Tawaaf Al-Ifaadhah and runs between As-Safa and Al-Marwah. Once he throws the pebbles at Jamrat Al-‘Aqabah and slaughters or shaves, all the prohibitions stipulated by Ihraam are removed for him except for sexual intercourse. However, if he has performed Tawaaf Al-Ifaadhah in addition to the above three acts, everything becomes permissible for him again, including sexual relations.

It is recommended for the pilgrim to increase acts of worship and call out the Talbiyah (a prayer recited by pilgrims) till he starts throwing the stones at ‘Aqabah. He should endeavor to read the Quran and supplicate more, especially on the Day of ‘Arafah, for the Prophet

said: “The best supplication is that of (the day of) ‘Arafah, and the best word that I and all Prophets have said on the day of ‘Arafah is, ‘La Ilaaha Illallaah wahdahu Laa Shareeka lah lahul-mulk walahul Hamd, wa Huwa ‘ala kulli Shay’in Qadeer’ (None has the right to be worshipped but Allah Alone, Who has no partner. His is the dominion and His is the praise, and He is able to do all things).” [At-Tirmithi] The pilgrim should also guard his tongue and avoid backbiting, fights and arguments.

said: “There are no days in which good deeds are dearer to Allah than in these days (i.e., the first ten days of Thul-Hijjah).” The Companions

The first ten days of Thul-Hijjah are the best days in the sight of Allah The Almighty; He termed them “the well-known days” in His Book, according to Ibn ‘Abbaas

. It is recommended, therefore, to remember Allah The Almighty more in the mosques, streets, marketplaces and everywhere.

Those who are not on Hajj should fast on the day of ‘Arafah, which falls in these ten days. The Prophet

was asked of the fasting of that day, so he said: “It erases the sins of the previous year and the present one.” [Muslim]

Allah The Almighty Says (what means): {Hajj is (during) well-known months, so whoever has made Hajj obligatory upon himself therein (by entering the state of Ihraam), there is (to be for him) no sexual relations and no disobedience and no disputing during Hajj. And whatever good you do – Allah knows it. And take provision, but indeed, the best provision is fear of Allah. And fear Me, O you of understanding.} [Quran 2:197]