The Story of Hajj - I 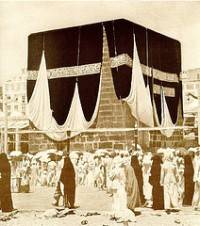 . She used a girdle so she could hide her tracks from Sarah. Ibraaheem

brought her and her son, a suckling baby, Ismaa’eel

to a place near the Ka'bah under a tree above the location of the well of Zamzam at the highest place in the mosque. In those days, no one dwelt in Makkah, nor was there any water. He settled them there and placed a leather bag near them containing some dates, and a small water skin container containing some water. Ibraaheem

then set out homeward.

Ismaa’eel's mother followed him saying, ‘O Ibraaheem! Where are you going, leaving us in this valley where there is no person whose company we may enjoy, nor is there anything (at all)?’ She repeated the question to him many times, but he did not look back at her. Then she asked him, ‘Has Allah ordered you to do so?’ He replied, ‘Yes.’ She said, ‘Then He will not neglect us,’ and returned while Ibraaheem

proceeded onwards. On reaching the Thaniyah [a mountain trail] where they could not see him, he faced the House and raised both hands in supplication to Allah, Saying (what means): {O our Lord! I have made some of my offspring to dwell in a valley without cultivation, by Thy Sacred House in order, O our Lord, that they may establish regular Prayer: so fill the hearts of some among men with love towards them, and feed them with fruits: so that they may give thanks.} [Quran 14:37]

“Haajar went on nursing Ismaa’eel and drinking from the water. When the water in the water-skin had been used up, she became thirsty and her child also became thirsty. She looked at him tossing about in agony; so she left him, for she could not endure looking at him, and found that the mountain of As-Safa was the nearest to her on that land. She climbed up, stood on it and started looking at the valley keenly, that she might see somebody, but she could not see anybody. Then she descended from As- Safa and when she reached the valley, she tucked up her robe and ran in the valley like a person in distress and trouble, till she crossed the valley. When she reached Al-Marwah she stood on it and started looking, expecting to see somebody, but she could not see anybody. She repeated that seven times (walking between As-Safa and Al-Marwah).”

“For this reason, people walk (Sa’y) between them (As-Safa and Al-Marwah). When she reached Mount Marwah, she heard a sound and said, ‘Hearken!’ (talking to herself). She then listened attentively and heard the same sound again. She then directed her speech to the sound saying, ‘I have heard you, so appear if you can help.’ She then found an angel in the location of the Well of Zamzam, digging the earth with his heel (or with his wing) until water sprung forth. She started to make something like a basin around it, using her hands in this way, and started filling her water-skin with water with her hands, and the water was flowing out after she had scooped some of it.”

also said: “May Allah have mercy on the mother of Ismaa’eel! Had she let the Zamzam flow (without trying to control it) (or had not scooped from that water to fill her water-skin) Zamzam would have been a stream flowing on the surface of the earth.”

"Then she drank and nursed her baby. The angel said to her, ‘Do not be afraid of perishing, for this is the place of the House of Allah which will be built by this boy and his father later on, and Allah never neglects His people.’ The House (the Ka'bah) at that time was on a high place resembling a hillock, and when torrents came, they flowed to its right and left. She lived in that way till some people from the tribe of Jurhum, or a family from Jurhum passed by her and her child as they (the Jurhum people) were coming through the way of Kada’. They landed in the lower part of Makkah where they observed a bird flying round and round. They said, ‘This bird must be flying around water, though we know there is no water in this valley.’ They sent one or two messengers who discovered the source of the water. So they all came (towards the water)."

The Story of Hajj - II