The Story of Hajj - II 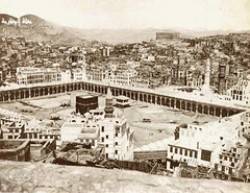 continued: "Ismaa’eel's mother was sitting near the water. They asked her, 'Do you allow us to stay with you?' She replied, 'Yes, but you will have no right to possess the water.' They agreed to that. "Ismaa’eel's mother was pleased with the whole situation, as she used to enjoy the company of people. So they settled there, and later on they sent for their families who came and settled with them so that some families became permanent residents there. “The child, Ismaa’eel, grew up and learned Arabic from them, and (his virtues) caused them to love and admire him as he grew up, and when he reached the age of puberty they made him marry a woman from amongst them. After Ismaa’eel's mother had died, Ibraaheem

after his marriage, in order to see his family that he had left before, but did not find him there. When he asked his wife about him, she told him that he went out seeking provision. He then asked her about their condition and way of living. She replied, 'We are living in misery; we are living in hardship and destitution,' complaining to him. He then asked her to convey his greetings to her husband and tell him to change the threshold of the gate (of his house). When Ismaa’eel

returned home, he felt that someone had visited them, so he asked his wife about that. She replied, 'Yes, an old man of so-and-so description came and asked me about you and I informed him, and he asked about our state of living, and I told him that we were living in hardship and poverty.' He asked her whether the old man had left him a message and she conveyed his message to him. Ismaa’eel

said, 'It was my father, and he has ordered me to divorce you. Go back to your family.' So, Ismaa’eel

divorced her and married another woman from amongst them (Jurhum people).

“A long time passed before Ibraaheem

repeated his visit. When he visited Ismaa’eel, he again did not find him and asked his new wife the same questions that he had asked the first wife. She told him that they were in good living conditions and prosperity. She also praised Allah. He asked her about their food and drink and she answered that they ate meat and drank water. He supplicated Allah to give them blessings in their meat and water.”

further said: “At that time they did not have grain, and if they had grain, he would have also invoked Allah to bless it. Then Ibraaheem

told his daughter-in-law to convey his greeting to her husband and tell him to ‘keep firm the threshold of his gate.’ When Ismaa’eel

returned home, he asked his wife whether someone had visited them. She replied, 'Yes, a nice old man came to me,' so she praised him and added, 'He asked about you, and I informed him, and he asked about our livelihood and I told him that we were in a good condition. Ismaa’eel

asked her, 'Did he give you any piece of advice?' She said, 'Yes, he told me to give his regards to you and ordered that you should keep firm the threshold of your gate’ Ismaa’eel

told her that the visitor was his father and that, ‘You are the threshold (of the gate). He has ordered me to keep you with me.'

“After a long time Ibraaheem

visited them. He saw Ismaa’eel

under a tree near Zamzam, sharpening his arrows. When Ismaa’eel

saw him, he stood up to welcome him (and they greeted each other as a father does with his son or a son does with his father). Ibraaheem

that Allah had ordered him to do a certain thing. Ismaa’eel

said, ‘Do what your Lord has ordered you to do.' Ibraaheem

asked, ‘Will you help me?’ ‘I will help you,’ answered Ismaa’eel

pointing to a hillock higher than the land surrounding it said, `Allah has ordered me to build a house in this place.’

"Then they raised the foundations of the Sacred House. Ismaa’eel

brought the stones and Ibraaheem

was building, and when the walls became high, Ismaa’eel

brought a rock and put it for Ibraaheem

who stood over it and carried on the building, while Ismaa’eel, may Allah exalt his mention, was handing him the stones. During this they repeated the following expression (what means): {….O Our Lord! Accept (this service) from us, for Thou art the All-Hearing, the All-Knowing.} [Quran 2:127]