Hajj: A Means of Affirming Tawheed 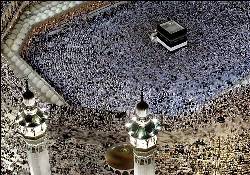 Allah The Almighty commanded His Prophet

Saying (what means): {Say, "Indeed, my prayer, my rites of sacrifice, my living and my dying are for Allah, Lord of the worlds. No partner has He. And this I have been commanded, and I am the first [among you] of the Muslims.} [Quran 6:162-163]

There is absolutely no doubt that the first matter, included in the words “my rites”, refers to all the rites of Hajj, such as Ihraam, which means the intention to start the rites, Talbiyah (to recite, “Labbayka Allahumma Labbayk, Labbayka la Shareeka laka Labbayk, Inna Al-Hamda wan-Ni‘mata laka wal-Mulk la Shareeka Lak”), slaughtering the Hady (sacrificial animal) and Tawaaf Al-Wadaa’ (farewell circumambulation of the Ka‘bah).

Furthermore, it was authentically narrated by Muslim and others from the Hadeeth of Jaabir

regarding Hajj that after leading the prayer at Thul-Hulayfah, the Prophet

mounted his camel, called Al-Qaswaa’, and rode to a nearby elevated plain called Al-Baydaa’. Jaabir

said, “I looked around in all directions as far as I could see, there were multitudes of people, some riding and some on foot.” He added, "The Messenger of Allah

was among us, and since he was receiving revelation and knew its interpretation, we followed him in whatever he did." There, at Al-Baydaa’, the Prophet

However, after them came successors who changed the matter completely. The Prophet

would recite the Talbiyah and declare Tawheed (Islamic monotheism), yet today, some of those who claim to love him recite Talbiyah in a way similar to that of the first generation of polytheists, who used to say, “Labbayka Allahumma Labbayk. Labbayka laa Shareeka laka Labbayk.” True, this is the correct statement of Talbiyah, but they would not stop at this. They used to add another statement to it, with the word “except.”

Pause here and contemplate the way those people used to worship Allah The Almighty. They would perform Hajj, raise their voices with Talbiyah, slaughter sacrificial animals, perform Tawaaf, Sa‘y and stand at ‘Arafat, but the one exception was their adding, “Except one associate; he is Yours; You own him and whatever he owns."

That is to say, they used to make an exception for a partner for whom they would ascribe some aspect of worship. You may also say they used to ascribe some supplications, vows, sacrifice and seeking help, all of which are acts of worship to another partner. They dedicated something of their acts of worship to that “partner”, when in fact those acts of worship are totally entitled to Allah The Almighty. They used to do this not because they believed that the associate had a share of dominion; but because they believed that this associate owned nothing (“You own him and whatever he owns”). In spite of this knowledge, they did this so that the associate would bring them, through the acts of worship they dedicated to him, nearer to Allah The Almighty in position. Allah The Almighty Says (what means): {Unquestionably, for Allah is the pure religion. And those who take protectors besides Him [say], "We only worship them that they may bring us nearer to Allah in position." Indeed, Allah will judge between them concerning that over which they differ. Indeed, Allah does not guide he who is a liar and [confirmed] disbeliever.} [Quran 39:3]

Today, some pilgrims recite Talbiyah and declare Tawheed, then utter the words of the polytheists. After saying, “Labbayka Allahumma Labbayk. Labbayka laa Shareeka laka Labbayk,” until they are hoarse, you may hear them adding, while standing at ‘Arafat, what means, “Except one associate; he is Yours.”

What do you think of those who say the same words of the polytheists, “Except one associate; he is Yours.”?

There is another form of Shirk (associating partners with Allah The Almighty) that is even more serious. These are the claims that some people make about ‘Ali, Al-Hasan and Al-Husayn

All of this is at the expense of the supplication, Tahleel (saying “La Ilaaha Illallah (There is no god but Allah)” and reciting the Talbiyah that Allah The Almighty prescribed.

One sees the wide gap between such people and their Prophet

. One has more right now than ever to shed tears for the loss of Islamic unity, which was torn apart when its sublime aim, Tawheed, was torn apart. It is incumbent upon every reformer to try to save this unity by stressing the importance of Tawheed among people and inviting them to adhere firmly to it. That is because if the people adhere firmly to it, they will have a greater chance of gathering around one word. Otherwise, the callers to Allah The Almighty will realize that those who believe in Allah The Almighty as the only Lord and God will never unite with those who believe that some humans – even those with great character – have some of the attributes of Allah The Almighty, or ascribe to them divine rights, even if they are very noble.

Do not be deceived by the great efforts that a person may make in performing acts worship if you know that he ascribes something of them, even if it is a mere vow, to others than Allah The Almighty. Allah The Almighty Says to our Prophet

(what means): {And it was already revealed to you and to those before you that if you should associate [anything] with Allah, your work would surely become worthless, and you would surely be among the losers.} [Quran 39:65]

May Allah gather us and all Muslims on the word of Tawheed, bring together the hearts of the believers, enable us and them to get rid of dissension by achieving and perfecting the word of Tawheed, as Allah The Almighty has indicated in Saying (what means): {And indeed this, your religion, is one religion, and I am your Lord, so fear Me.} [Quran 23:52]