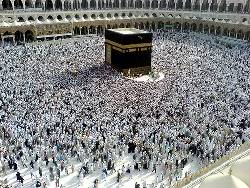 Hajj is rather like an international annual public and formal conference. Unlike other acts of worship, it provides a live, direct and bright reality in terms of useful moral values on the human level. This is achieved through the meeting of the masses of pilgrims in a harmonious way that symbolizes and represents Muslims in the different regions of the world. They get to know each other, unite, exchange opinions and organize their affairs in spite of the differences in their colors, homelands, languages, levels and life styles, realizing the verse in which Allah The Almighty Says (what means): {And indeed this, your religion, is one religion, and I am your Lord, so fear Me.} [Quran 23:52]

Moreover, this scene reminds the soul of past memories and urges one to study it and deduce lessons therefrom in order to head towards a promising future when Muslims achieve for themselves, their countries and their coming generations more security, dignity, pride, growth and prosperity.

The season of Hajj is considered an excellent opportunity for the Muslim masses to achieve greater cooperation and solidarity in order to unify their ranks in the face of contemporary challenges, regardless of their different appearances and manners.

5)   Getting used to self-restraint and discipline:

Pilgrims practice self-restraint and discipline when they abandon the adornment of the life of this world and assume Ihraam. They abstain from shaving hair, cutting nails, using perfumes and such other acts that are known to be forbidden during Ihraam. All this is performed for the Sake of Allah The Almighty, in compliance with His Orders and hoping to attain His pleasure and reward and to draw closer to Him. At-Tabaraani narrated in Al-Kabeer that the Prophet

said: "Allah boasts about the people of ‘Arafat to the Angels, and Says: 'Look at My slaves, they have come to Me, shaggy and dusty, they have come from every deep valley. So, bear witness that I have answered their supplication, accepted their intercession and granted mercy to the negligent among them for the sake of the benevolent ones.'"

6)   Hajj is a real mirror of human equality and a preview of the gathering of people on the Day of Judgment:

In Hajj, the meanings and manifestations of human equality among the masses of people appear clearly. They are all in a state of Ihraam and in one place; they gather at the same time and wait to perform the same rituals in sequence. All of them are equal, like the teeth of a comb. There is no difference between the rich and the poor, the old and the young. They are all wearing similar simple white pieces of cloth, which symbolize the oneness of human creation, and that Islam holds all races and peoples as equal, for they are the same in the Sight of Allah The Almighty. In addition, through these scenes, images that stand for the Last Day are evoked in the human soul – the day when people are gathered to the Lord of the Worlds barefoot and naked, and no person is favored over others except by their piety and good deeds.

Islam intended to achieve all the above-mentioned benefits and purposes. The need for them is renewed with the passage of time and the development of civilization.

However, there are landmarks and practices that pilgrims should not forget or be lenient therewith. These include:

1- Sincerity of intention to Allah The Almighty, remembering His greatness in all the states and times, honoring the symbols of Allah The Almighty, engaging in remembering, glorifying, reciting Talbiyah (saying, “Labbayk Allahumma Labbayk” (O Allah, I hasten to You)) and supplicating Him, for this proves the truthfulness of souls and the piety of hearts. Allah The Exalted Says (what means): {That [is so]. And whoever honors the symbols of Allah - indeed, it is from the piety of hearts.} [Quran 22:32]

2- Kind treatment to all other pilgrims, gentleness in dealing with them, favoring them over oneself, hastening to offer them assistance and advising them, being tolerant of them, having patience with them and avoiding showing anger at their errors and pointing out their mistakes in a rude manner.

3- Investing all one's time in goodness, righteousness, kindness and obedience and not wasting it in that which does not benefit so that the pilgrim does not waste his effort, make mistakes and lose his rewards.

4- Avoiding actions that abuse the sanctity of Hajj, its place and time and violate its status. This entails keeping away from practices that hurt Muslims or cause harm to them, maintain public and private utilities, observing cleanliness, avoiding throwing dirt and garbage in the streets and places where pilgrims gather, avoiding crowds, keeping away from exhausting and tiring oneself as well as avoiding sitting on roads and yards and exposing others to harm.

The government of Saudi Arabia has undoubtedly exerted costly and strenuous efforts to maintain the safety of the pilgrims, insure services for them, provide them with comfort, and achieve their interests. This is all so they can perform their rituals easily and return to their homelands and families secure, assured, happy and optimistic with the Hadeeth in which the Prophet