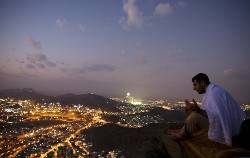 said that scholars agreed that Hajj is invalidated only if one has sexual relations during Ihraam. The proof of this is that a man asked Ibn ‘Umar

saying that he had had sexual relations with his wife while they were both in a state of Ihraam. Ibn ‘Umar

said, “You have invalidated your Hajj. Go, you and your wife, and complete your Hajj with your people and then come next year along with your wife and perform Hajj, then slaughter a sacrificial animal. ‎If you could not slaughter a sacrificial animal, both of you should fast three days during Hajj and seven days when you return home.” This was also the opinion of Ibn ‘Abbaas and ‘Abdullah ibn ‘Umar

and we do not know anyone who contradicted their opinion in that era.‎‎‎

said in Al-Mughni (5/168), “As for the invalidation of Hajj, there is no difference between being coerced or not and we do not know any opinion that contradicts this.”

‎‎‎If one had sexual contact outside the vagina with his wife without ejaculating, he must slaughter a sacrificial animal and his Hajj is valid, but if he ejaculated, he must slaughter a Badanah (a camel or a cow) and his Hajj is invalid. In the first case, Hajj is considered valid as there was no ejaculation and this is similar to touching or foreplay that does not make Ghusl (ritual bath) obligatory.‎‎‎

stated that scholars agreed that it is prohibited to cut any tree in Al-Haram, and that it is permissible to take from a tree called Al-Ithkhir, and any vegetation planted by humans such as beans, scented plants and so forth.‎‎‎

‎‎‎As for what was planted by humans, there are different opinions, as Ash-Shaafi’i

stated that it is impermissible to cut it.‎‎‎

‎‎It is permissible to benefit of the broken branches and uprooted trees that were not broken by humans and the leaves that fell on the ground. This was stated by Ahmad

and we do not know any different opinion in this regard, as the Hadeeth dealt with cutting the trees and these are not cut by humans.‎‎

said in Al-Mughni (5/247), “If one stands for prayer, he should continue the Tawaaf and Sa‘y that he started before the prayer, according to the scholars that we mentioned. Ibn Al-Munthir

who said that one should restart his Tawaaf, but the opinion of the majority of scholars is worthier.” ‎

‎The question is whether one should continue Tawaaf from the same place where he stopped or start again.‎ ‎Ahmad

said that one should start from the Black Stone.‎

17) (Hajj is an individual obligation upon every adult Muslim who has the means to make it there, according to the consensus of scholars. Al-Majmoo‘ (7/7) and Bidaayat Al-Mujtahid (308/1).‎

18) (If a person has the ability to perform Hajj in person, he is not permitted to authorize another person to perform the obligatory Hajj on his behalf, according to the consensus of scholars. Performing Hajj on behalf of another person voluntarily is permissible by consensus.) Al-Mughni (3/206 Ibn Al-Munthir), Bidaayat Al-Mujtahid (1/310), Fat-h Al-Baari (4/53 Ibn Al-Munthir).

‎Sa‘di Abu Jayb mentioned 107 issues of consensus from the books that he relied on. ‎

said, ‎"Scholars agreed that the Imam should combine Thuhr and ‘Asr prayers at ‘Arafaat.”

21) It was said in Al-Mughni (5/275) that standing at ‘Arafaat ‎does not require Tahaarah (state of ritual purity), concealing (what is concealed in prayer), facing the Qiblah or having the intention according to scholars' consensus.‎

said that ‎ ‎all the scholars agreed that standing at ‘Arafaat without Tahaarah does not affect one's Hajj and one should do nothing for this.‎

said that ‎scholars agreed that women do not have to do Ramal (walking fast with short steps) around the Ka‘bah or between As-Safa and Al-Marwah and they do not have to do Idhtibaa’ (uncovering the right shoulder). (Sharh Al-‘Umdah)‎

reported the unanimous impermissibility of assigning a proxy if one is capable of performing obligatory Hajj.‎