Righteous Deeds with the Same Reward as Hajj and ‘Umrah – III 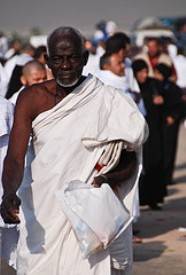 said, “O brothers, if you were prevented from performing Hajj this year, turn inward and exercise self-restraint.”

If you are prevented from performing the Hajj rituals, you can still shed remorseful tears for your sins; this is like the shedding of blood i.e., when the sacrificial animal is being slaughtered. You should turn to your Lord with a humble and submissive heart full of fear and hope as the pilgrim stands in the Mashaa‘ir, (Holy places), or in the Mosque of Al-Khayf in Mina. A person who is far away from the Ka’bah should not draw himself further away from the mercy of his Lord by committing sins. The Mercy of Allah The Exalted is close to whoever turns to Him in repentance and submission. Whoever is unable to go to the Ka’bah to perform Hajj, should seek the Lord of the Ka’bah. Allah The Exalted is closer to man than his jugular vein.

Whoever missed Hajj this year and was unable to stand at ‘Arafat, should observe the rights of his Lord that he knows. Whoever is unable to spend the night in Muzdalifah should make up his mind and be determined to obey Allah The Exalted and draw close to Him. Whoever could not stay in the Mosque of Al-Khayf in Mina can observe the rights of Allah The Almighty with a heart full of fear and hope. Whoever could not slaughter the Hady (sacrificial animal) in Mina can slaughter the evil desires of his self that is inclined to evil. Thus, he can achieve his aspirations. Whoever could not go to the Ka’bah due to its distance can easily turn to the Lord of the Ka’bah. He is nearer to whoever implores Him than his jugular vein. If we could not go to these places, let us display our submission before our Lord here. If we could not stand at ‘Arafat, let us rectify our past deeds and lives. If we could not touch the Black Stone, let us soften our harsh, stone-like hearts. If we could not spend the night at Mina, we can bury our sins and misdeeds wherever we are and make a fresh start.

How unfortunate is the man whose past sins have not been forgiven! Whenever such a man intends to do a good deed, he refrains from performing it. He fails to avail himself of the blessed spiritual seasons. He enters the gardens of success and prosperity, yet never stretches his hands to harvest the fruits. How many of us fear Allah The Almighty, and how many of us have attained our aspirations and hopes? If we have missed out on the chance of being in Mina, let us shed our remorseful tears here. Why should we not cry when we do not know what is to become of us after this life? How can we stand still while we are unaware of our destination after death?

We should shed our tears today for the sake of that day. If people tread on the path towards Allah The Exalted and we stand still, and if they draw closer to Him while we are far away from Him, how can we feel certain we are not one of those whom Allah The Almighty did not wish to motivate to participate in Jihaad, so He caused them to linger behind with those who would be of no use in a battle?