Hajj: A Season for Enjoining Good and Forbidding Evil-I 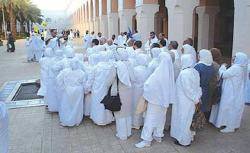 People come from all over the world to Al-Masjid Al-Haraam during the Hajj. They visit the House of Allah The Almighty with hearts throbbing with yearning and longing. However, anyone who observes these pilgrims would find that many of them commit grave violations of the rules of Sharee’ah (Islamic law).

We are sure that these pilgrims commit such violations out of ignorance, not deliberately; therefore, scholars should seize the opportunity and edify the pilgrims on the true pure teachings of Islam while they are in the holy places. Scholars should make full use of the Hajj season; not only the days of Hajj, but the entire months of Hajj. The pilgrims hasten to visit Al-Masjid Al-Haraam in order to perform Hajj and Muslims are commanded to hasten to good doing in general. Allah The Exalted Says (what means): {And hasten to forgiveness from your Lord and a garden as wide as the heavens and earth, prepared for the righteous.} [Quran 3:133] The Prophet

One of the commendable righteous deeds which Muslims should hasten towards are those deeds whose fruits and benefits extend to others, rather than merely to the ones who perform them, such as enjoining good and forbidding evil.

Why is enjoining good and forbidding evil vital during Hajj?

It is vital due to the sanctity of the holy places to which the pilgrims come from all over the world.

The greatness of this act of worship, i.e. Hajj.

In order to repel religious innovations that lead to Shirk (polytheism) and constitute a significant danger if they were to become firmly rooted in the hearts of the pilgrims, as they witness them carried out in the greatest and most honorable places on earth.

The pilgrim should return to his people, shoulder the task of reforming and rectifying his community, and edifying his people in the true religion of Allah The Almighty.

In order to rectify the beliefs of the pilgrims who have spent their lives and money in order to perform this act of worship and turn back after having their sins forgiven and after being granted Paradise.

In order to follow the example of the Prophet

and the guidance of our righteous predecessors in Hajj.

The Sunnah (tradition) of the Prophet

in enjoining good and forbidding evil in Hajj:

enjoined good and forbade evil during Hajj. Once when the Prophet

heard one of the pilgrims proclaiming that he was performing Hajj on behalf of another man, while he had not performed the obligatory Hajj himself, the Prophet

asked him: “Have you performed the obligatory Hajj yourself?” The man replied, “No.” The Prophet

said: “First perform the obligatory Hajj and only after that may you perform Hajj on behalf of Shubrumah.”

admonished the pilgrims who delayed ending their state of Ihraam and did not drive the Hady (sacrificial animal). The Prophet

was angry because of their action and commanded them to end their state of Ihraam and they did. The Prophet

from gazing at a woman from the Khath‘am tribe who came up to them. Al-Fadhl

kept looking at the woman and the Prophet

kept turning Al-Fadhl’s face to the other side.

followed the footsteps of the Prophet

in this regard. Shujaa‘ ibn Al-Waleed

said, “I was performing Hajj with Sufyaan Ath-Thawri and he did not stop enjoining good and forbidding evil during the journey to and from the holy places.” [Hilyat Al-Awliyaa’]

who was known as Ibn Al-Akfaani, reported that his father said, “I performed Hajj with Abu Al-Qaasim ‘Abdullah ibn Muhammad Al-Baghawi and Abu Bakr Al-Aadami, the reciter of the Quran. When we reached Madeenah, Abu Al-Qaasim Al- Baghawi came to me and said, ‘O Abu Bakr; there is a blind man who is preaching to people in the mosque of the Prophet

. He is telling them lies and relating Mawdhoo‘ Ahadeeth and fabricated stories. Let us go and forbid him from what he is doing.’"

I said to him, ‘Our advice to him will be futile before all these people. We are not in Baghdad and people do not know us and our status (as knowledgeable scholars). We need to do something else which is more suitable for this time and place.’ I told Abu Bakr to get ready and recite the Quran. As he started reciting the Quran, people started to leave the blind man one by one and come to listen to the sweet voice of Abu Bakr. I heard the blind man saying to his helper, ‘Take my hand and let us leave; this is how the blessings end.’” [Taareekh Baghdad]

It would be great if the scholars, reformers, and callers to Allah The Almighty follow the example of the Prophet

in this regard. They should be the role models for Muslims in all their actions, especially during the season of Hajj. They should be forerunners and pioneers in doing good deeds. Scholars, reformers, and callers to Allah The Almighty should hasten to do good deeds which they enjoin upon people and avoid committing the prohibitions, which they forbid others.

Hajj: A Season for Enjoining Good and Forbidding Evil-II