Hajj: A Season for Enjoining Good and Forbidding Evil - II 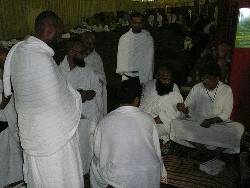 Violations of the rules of Sharee’ah (Islamic law) differ according to their degree; some of them imply Shirk (polytheism), some lead to it, others imply failure to do what ought to be done, i.e. neglect in carrying out acts of worship, and others constitute errors in the rituals of Hajj. This is a brief account of these violations of Sharee’ah rules that highlights the importance of enjoining good and forbidding evil during Hajj:

1)     What some pilgrims do at the Public Library in Makkah, which is located in Al-Ghazah Street, east of the expansion of Al-Masjid Al-Haraam. People think that this is the birthplace of the Prophet

. Unfortunately, people circumambulate the library building, turning their backs to the Ka‘bah and pray instead in the building’s direction! They supplicate to the Prophet

Moreover, some employees in the library commit violations as well, such as glorifying the library building, applying expensive perfume to it, and performing prayers at the times when performing supererogatory prayers is forbidden. In fact, one can notice many other violations that are committed there.

: Some pilgrims supplicate to the dead people, seek aid from them and relief from Khadeejah

rather than from Allah The Almighty. They pour perfume on the grave of Khadeejah

3)     Among the places that witness violations of Sharee’ah are the caves Hiraa’ and Thawr, the tall white obelisk on ‘Arafaat, the grave of the mother of the Prophet

in Al-Abwaa’, and the grave of our mother Hawwaa’ (Eve) in Jeddah. These places witness many violations of Sharee’ah such as supplicating others than Allah The Exalted, taking some of the dust in order to seek blessings from it and other blameworthy practices.

4)     There are other violations of Sharee’ah such as gross impermissible exposure of women's adornment, intermixing between the two sexes during Tawaaf and in other places, selling tobacco, cigarettes and hookah (hubble-bubble) in public places in Makkah and in ‘Arafaat in particular.

The requisite role of scholars, reformers and callers to Allah The Almighty:

1)     It is common knowledge that the people of Makkah and its surrounding areas have the greatest share in the responsibility to enjoin good and forbid evil among the pilgrims. If enjoining good and forbidding evil among the pilgrims is a communal obligation for the people of other places in Saudi Arabia, it is an individual obligation for the people of Makkah and the adjacent places; as the prohibitions are committed within their very community.

2)     The callers to Allah The Almighty should be present at the places where the violations are committed after coordinating with official authorities and translators.

3)     Scholars and seekers of knowledge should be invited to these places in order to help formulate a perception about the situation and its gravity.

4)     Useful religious books and meaningful religious tapes that address the topics of concern should be distributed among the pilgrims.

5)     Officials should be exhorted to exert efforts in order to change the unfavorable situations and practices in the holy places.

6)     The seekers of knowledge should advise one another to enjoin good and forbid evil during Hajj.

7)     Visiting the organizers of the Hajj campaigns, especially the scholars, in order to offer them advice.

8)     Recording these violations of Sharee’ah and conveying them to scholars and traders so that each would shoulder his due responsibility.

9)     Urging preachers and public speakers to address these violations of Sharee’ah inside and outside the holy places.

10)     Considering future plans and projects of enjoining good and forbidding evil (Hisbah work) during the Hajj season, in the light of the reality that was observed in the previous years.

It is time we committed ourselves to work and embark upon this great task. We should hasten to save pilgrims from the perils of Shirk. This is their due right over us. We should advise them and have mercy upon them. Bear in mind that Muslims should like for their fellow Muslims what they like for themselves. Indeed, we all like to be saved from Hellfire and to enter Paradise.

Therefore, we should set out to advise others, enjoin good, forbid evil, and guide others to the straight path kindly and wisely. We should treat them gently and kindheartedly. Indeed, kindness adorns everything it accompanies and distorts everything it leaves.

Hajj: A Season for Enjoining Good and Forbidding Evil-I