Al-Multazam: Its Location and Supplication at It - III 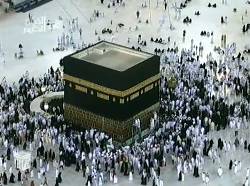 A.   The Hadeeth of ‘Abdur-Rahmaan ibn Abi Safwaan, may Allah be pleased with him:

‘Abdur-Rahmaan ibn Abi Safwaan, may Allah be pleased with him, said, “When the‎ Messenger of Allah

conquered Makkah, I said,‎‎ ‘I will get dressed, because my house is on the road, and I will go to see what the Messenger of Allah

will do.’ I set out and saw the Prophet

having gone out of the Ka'bah along with his Companions and they were embracing the part of the Ka'bah between the door and Al-Hateem. They were placing their cheeks against it, and the Messenger of Allah

was in their midst.” [Abu Daawood, Ahmad and Al-Bayhaqi]This Hadeeth is classified as a weak hadeeth by ibn Ma‘een, Abu Haatim, Abu Zor‘ah and others because it has Yazeed ibn Abi Ziyaad in its chain of narrators. Review Al-Jarh wa At-Ta‘deel.

B.   The Hadeeth of ‘Abdullaah ibn ‘Amr, may Allah be pleased with him:

‘Amr ibn Shu‘ayb narrated on the authority of his father who said, "I performed Tawaaf with ‘Abdullaah and when we reached the back of the Ka'bah I said, 'Will you not seek refuge with Allah?' He said, 'We seek refuge with Allah from Hell.' Then he moved until he went to the Black Stone, stood between the corner and the door, then he placed his chest, face, arms and palms like this, and stretched them out while saying, ‘This is what I saw the‎ Messenger of Allah

However, each of these Hadeeths supports the other, and Al-Albaani

ruled it as authentic (Saheeh)

"As for Al-Hateem, there are several opinions regarding its location; The first is that it is between the corner and the door, which is Al-Multazam. Another opinion is that it is the wall of the Hijr because it was destroyed and excluded from the frame of the Ka'bah."

The sound opinion is that Al-Hateem is the Hijr itself. This is what was mentioned by Al-Bukhari

in his Saheeh. He quoted the Hadeeth of Al-Israa’ (the Nighty Journey) as proof of this, in which the Prophet

said: "While I was sleeping at Al-Hateem..." or he might have said: "at Al-Hijr". [Sharh Tahtheeb Sunan Abu Daawood]

C. ‎‎‎‎It was narrated on the authority of Ibn ‘Abbaas, may Allah be pleased with him, that the Prophet

said:‎‎‎‎ "What is between the corner and the Maqaam is the Multazam. Anyone who is sick and invokes Allah to cure him will be cured." [At-Tabaraani; Al-Albaani: Dha‘eef (weak)]

said, “If one wanted to go to Al-Multazam (between the Black stone and the door, place his chest, face, arms, and palms against it and invoke Allah The Almighty, he may do this. It is permissible to do this before performing Farewell Tawaaf as there is no difference between performing it during Farewell Tawaaf or at any other time. The Companions used to do this upon entering Makkah.” [Majmoo‘ Al-Fataawa]

did it, but it was narrated that some of the Companions, may Allah be pleased with them, did it. Is embracing Al-Multazam a Sunnah? What time should it be done? Should it be performed upon arriving, when leaving or at any time?

in this regard, but the Companions, may Allah be pleased with them, used to do this upon arriving.

“Jurists said that this should be done before leaving and they specified the place that is between the corner that has the Black Stone and the door.

Thus, embracing the Ka'bah is permissible if it does not cause harm.” [Ash-Sharh Al-Mumti']

"It is preferable for the pilgrim who is bidding the Ka'bah farewell to stand at Al-Multazam, which is between the corner and the door, and say: "O Allah! The House is Yours and the slave is Yours." [Al-Umm]

said, "At-Tahaawi said in his Mukhtasar on the book of Abu Haneefah

"When one finishes Tawaaf Al-Qudoom (the arrival Tawaaf), he should go to Al-Maqaam, pray two Rak‘ahs there then go to Zamzam well, drink from its water, pour it over his face and head and then go to Al-Multazam, which is between the Black Stone and the door, place his chest and forehead against it while clinging to the cover of the Ka'bah and invoking Allah, then return." [Badaa’i‘ As-Sanaa’i‘]

E.   Ibn Qudaamah, may Allah have mercy on him him, said, "It is preferable for the one who is bidding the Ka'bah farewell to stand at Al-Multazam, which is between the corner and the door, and embrace it by leaning one's chest and face against it, and invoking Allah The Almighty. This is proved by Abu Daawood on the authority of ‘Amr ibn Shu‘ayb.” [Al-Mughni]