The Fruit of Hajj Mabroor - II 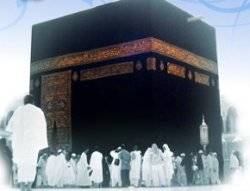 That is part of what the virtuous lady mentioned. She also said that her son used to attend the congregational prayers in the mosque, and now he no longer frequents the mosques. All of this is done in the name of moderation and modernism promoted on those satellite channels and those Daa‘iyahs.

It is amazing that some of those evildoings were broadcast on that famous satellite channel, in addition to such religious innovations as the congregational supplication on the Day of ‘Arafah. Then, those pilgrims started embracing each other, and congratulating each other for the acceptance (of Hajj) after the sunset of the day of ‘Arafah.

I do not wish to comment on what the virtuous lady mentioned, because everyone endued with knowledge and awareness knows well that the spirit of worship is quite far from such trifling and follies.

It is well-known that those who are knowledgeable about religion are never certain about the acceptance of their deeds. On the contrary, they feel they were short of perfecting it, and ask for Allah's forgiveness when the deed is done, as stated by our Lord The Almighty (what means): {Then depart from the place from where [all] the people depart and ask forgiveness of Allah. Indeed, Allah is Forgiving and Merciful.} [Quran 2:199] Some scholars felt fear on that day, while others had hopes that their deeds would be accepted and that they would receive forgiveness for the sins. But they neither shook hands, nor embraced each other, nor congratulated each other upon departure from ‘Arafat. They, rather, depart with hope, desire, fear, submissiveness and humbleness.

The religious innovation of taking pictures while performing rituals almost takes away the spirit of those rituals, and impedes perfect submissiveness in performing them. However, this innovation has become widespread among the assemblies of pilgrims, especially with the spread of cell phones with cameras.

Another Daa‘iyah gets off the bus on the night to be spent in Muzdalifah and gets his head shaved, and orders those with him to do the same, under the claim that the Messenger of Allah

said: "Do, and there is no difficulty." One of them said, "We have turned the juristic rule, 'difficulty brings about facilitation', into a kind of foolishness."

How should we make our Hajj acceptable?

We could make our Hajj acceptable only if we seek to be sincere to Allah Alone, follow the Prophet

To realize this, we should, first of all, understand well the meaning of these words. These words are said when one is called by Him whom he loves and exalts. It is a word of response to Him whom you love, exalt, fear and desire: if He calls you, you will hasten to respond to his call saying, "Labbayk". However, if you are called by someone whom you neither like nor respect, you will delay and may even disdain to respond to his call.

On the journey of Hajj, we are called by the One for Whom we have in our heart all love, desire and fear, the Lord of majesty and honor, thereupon we hasten to respond to His call, because He, The Exalted, The Almighty, is dearer to us than anyone else. That is one of the signs of faith, as shown in the following Hadeeth: "Whoever possesses the following three qualities will have the sweetness of faith: The one to whom Allah and His Messenger become dearer than anything else, who loves a person and he loves him only for Allah's sake, and who hates to revert to disbelief as he hates to be thrown into the Fire." [Al-Bukhari and Muslim]

The reward of those who respond to the call

The reward of those who respond (to Allah's call) is that He suffices them against their worries, and averts from them whatever evil they fear and are wary of. In confirmation of that, Allah The Almighty Says (what means): {Those [believers] who responded to Allah and the Messenger after injury had struck them. For those who did good among them and feared Allah is a great reward - Those to whom hypocrites said, "Indeed, the people have gathered against you, so fear them." But it [merely] increased them in faith, and they said, "Sufficient for us is Allah, and [He is] the best Disposer of affairs." So they returned with favor from Allah and bounty, no harm having touched them. And they pursued the pleasure of Allah, and Allah is the possessor of great bounty.} [Quran 3:172-174]

Without doubt, Paradise is the greatest reward for those who respond (to the call of Allah The Almighty as He Says, (what means)): {For those who have responded to their Lord is the best [reward], but those who did not respond to Him - if they had all that is in the earth entirely and the like of it with it, they would [attempt to] ransom themselves thereby. Those will have the worst account, and their refuge is Hell, and wretched is the resting place.} [Quran 13:18]

(in compliance with Allah's statement, (what means)): {O you who have believed, respond to Allah and to the Messenger when he calls you to that which gives you life. And know that Allah intervenes between a man and his heart and that to Him you will be gathered.} [Quran 8:24]

The Fruit of Hajj Mabroor - III