The Fruit of Hajj Mabroor - I 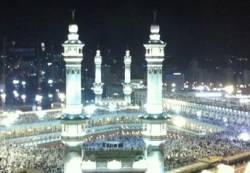 Hajj Mabroor is the Hajj that is accepted by Allah, in which the pilgrim observes the conditions that validate the deed, and make it accepted, i.e., to do the deed with sincerity to Allah The Almighty, and according to the guidance of the Messenger of Allah

Undoubtedly, Hajj is one of the best deeds and is counted as being a kind of Jihaad in the Cause of Allah The Almighty. The Messenger of Allah

replied: ‘To believe in Allah and His Messenger (Muhammad).’ The questioner then asked, ‘What comes next (in goodness)?’ He

replied: ‘To take part in Jihaad in the Cause of Allah.’ The questioner again asked, ‘What comes next (in goodness)?’ He

It is narrated on the authority of ‘Aa’ishah

that she said, "O Messenger of Allah! We see that Jihaad is the best deed. Should we (women) not take part in Jihaad?" He

informed the one who performed Hajj and avoided all proscriptions – be they apparent or hidden – that his sins would be forgiven. He

said: "Whoever performs Hajj during which he neither has sexual intercourse (with his wife) nor commits sins, he will come out as sinless as a newborn on the very day his mother gave birth to him.” [Al-Bukhari]

said: "There is no reward for Hajj Mabroor other than Paradise."

Among the signs of Hajj Mabroor is that the pilgrim returns in a state better than he was, abandons acts of extravagance, negligence and misdeeds, and changes his evil companions for good and righteous ones, and the gatherings of frivolity and heedlessness for those of remembrance of Allah The Almighty.

Sincerity is one of the most difficult characteristics to achieve, especially when the action is too obvious to conceal, such as Hajj. A Muslim may observe a fast in the way of Allah so that no one knows about his fasting, and may perform prayer in the middle of the night inside his house, with no one to learn about his prayer. However, he cannot conceal his Hajj to the Sacred House of Allah. For this reason, the requisite effort to attain such sincerity in Hajj as well as in all the apparent deeds is multiplied, and no one could do it but the one who is granted success and guidance by Allah The Almighty.

It was the habit of the righteous to be abstinent and austere in Hajj, and humble themselves in worship of Allah The Almighty, by abasing themselves and showing great need for Allah. It is reported from the Messenger of Allah

that he performed Hajj on a packsaddle and it is narrated that he said: "O Allah! Let it be Hajj with the intention not to be seen nor heard of men." [Ibn Maajah]

It is narrated on the authority of Thumaamah ibn ‘Abdullah ibn Anas that he said, “Anas

performed Hajj on a packsaddle and he was not a miser. Anas

said, ‘The Messenger of Allah

performed Hajj on a packsaddle and the same mount was carrying his baggage too.’" [Al-Bukhari]

), and not because of his destitution or miserliness. Where is this in comparison with the Hajj encouraged by some tourist companies or the satellite Hajj, i.e. what is known as the "five-star Hajj", in reference to ultimate opulence, luxury and comfort offered?

Once, I received a phone call from a virtuous lady who performed Hajj this year with one of those Daa‘iyahs (callers to Allah), who appear on satellite channels and tempt the people, i.e. those known as the new Du‘aat. She said to me, "Have you seen Hajj on such and such channel (naming one of the famous channels)? In no way is what we have seen and done this year during Hajj, the same Hajj enjoined upon us by Allah The Almighty, and clarified to us by His Messenger

said: "Take (and learn) from me your rituals." I asked her, "Take it easy! What has happened?" she said with great agitation, "This man should not be left to play with the minds of our young men and women. I have seen how the young men and women are tempted by all he says and does; and my son is one of those tempted by him." I said to her, "Tell me what happened."

On this journey, I have seen wonders. I have seen nubile young girls traveling with no Mahram (non-marriageable male guardian); and intermixing between young men and women in those holy sites, joking and making a lot of noise in a way that no Muslim who adheres to the Islamic teachings could endure. The young Daa‘iyah commands the young men to shave the beard saying, ‘It is not suitable to shave the head and keep the beard.’ He also says, ‘Let him shave his beard who does not originally keep it.’ Whenever he saw a girl wearing a Niqaab (face cover), he would say to her, ‘As long as you will ask questions, the camera will be on you, so take off the Niqaab.’ One girl did accordingly and then entered upon the other women weeping. Filming extends up to three in the morning, and everyone usually gets tired and most of them sleep and fail to attend the Fajr prayer.

“On the ‘Eed day, the famous Daa‘iyah refused to have his head shaved under pretext that he would have TV meetings after Hajj.”

The Fruit of Hajj Mabroor - II