About Permitting Throwing the Pebbles before Zawaal 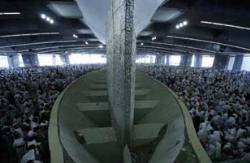 After the painful incident that took place in Mina on Thursday, 12/12/1426 A.H., which resulted in hundreds of dead and wounded, (may Allah forgive the dead and heal the wounded), many writings in the newspapers and on the Internet discussed the topic in terms of its causes and methods of treatment. The strangest and most illogical were the calls that do not see a solution to this problem except by contradicting the guidance of the Prophet

by permitting throwing the pebbles on the days of Tashreeq before Zawaal (when the sun declines from the middle of the sky). The following is our answer to these calls:

was most merciful to his nation, however, he did not throw the pebbles nor allow those who offered pilgrimage with him in the Farewell Pilgrimage to throw except after Zawaal; though he

permitted the shepherds not to spend the night in Mina, allowed the women and the weak ones to leave Muzdalifah before dawn, and answered those who asked him about advancing or delaying any of the rites of the Day of Sacrifice, saying: “Do that, there is nothing wrong with it.“ This is a clear indication that throwing the pebbles before Zawaal does not have a legitimate concession, otherwise he

would have done it or given concession to the Companions to do it.

Second: Why is religion and the rulings of Sharee‘ah the first thing we sacrifice in order to get out of distressful situations, which we ourselves created, to the extent that if a person encountered a problem, the first thing that comes to his mind is to neglect a ruling of Sharee‘ah or take it lightly. When he has done that, he may think of other solutions. This is a calamity and a sign of weakness of faith in the hearts of those people. Their adherence to the statements of some scholars is but an excuse to justify their attitude, so as not to be accused of negligence in their religion.

1)  Internal and external Hajj campaigns which oblige the pilgrims to rush and leave Makkah as soon as possible.

2)  The pilgrims’ unawareness of the fact that the one who has stoned the Jamrat on the twelfth day and prepared to leave Mina then was kept there by the crowding, is not obliged to stay overnight in Mina on the night of the thirteenth, even if the sun sets while he is still in Mina.

3)  Some pilgrims believe that it is obligatory to leave Makkah too, not only Mina, before sunset, which was never stated by any of the Muslim scholars.

4)  Some pilgrims believe that death during the rites of Hajj ensures Paradise, to the extent that some people regretted surviving that tragic incident.

Fourth: The advocates of that call should fear Allah The Almighty in themselves and their nation; they should be keys to goodness and locks to evil, not the contrary. They should know, if they do not know, that permitting throwing the pebbles before Zawaal is the starting point for the demolition of the Hajj rulings. Shaykh Muhammad ibn Ibraaheem Aal-ash-Shaykh, in response to those who permitted throwing the pebbles before Zawaal, stated that the latter’s argument included unprecedented mistakes, which are the basis to demolish the rulings of the Hajj. Moreover, it paves the way for deviant sects to reject whatever they wish of the Islamic rulings, but Allah refuses except to perfect His light. [Tahtheer An-Naasik, p. 4]

Fifth: The following are some of the most important solutions to this problem:

1)  Obliging the organizers of Hajj Campaigns, whether the internal or the external ones, to delay their reservations to a proper time that enables the pilgrims to throw the pebbles, offer the Farewell Tawaaf, then reach Jeddah serenely and safely.

2)  Preventing the organizers of land campaigns from leaving Makkah until late on the night of the thirteenth.

3)  Instructing people that they are allowed to throw the pebbles until before sunset, and that their departure from Mina is achieved by leaving it after stoning the Jamrat of Al-‘Aqabah, which takes only a few minutes. The Jamrat of Al-‘Aqabah is located at the border of Mina in the direction of Makkah, so if they left Mina then they may stay in Makkah for any time they like.

4)  To explain to the pilgrims that dying while offering pilgrimage does not guarantee entering Paradise; rather, exposing oneself deliberately to death is suicide that makes them dwell in Hell. May Allah help us all to fulfill what pleases Him.