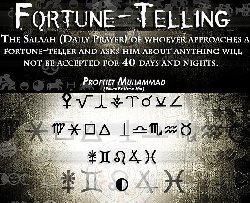 There are among mankind people who claim knowledge of the unseen and the future. They are known by various names, among which are: fortune-tellers, soothsayers, foreseers, augurs, magicians, prognosticators, oracles, astrologers, palmists, etc. Fortune-tellers use various methods and mediums from which they claim to extract their information, among which are: reading tea-leaves, drawing lines, writing numbers, palm-reading, casting horoscopes, crystal ball gazing, rattling bones, throwing sticks, etc. Practitioners of occult arts, who claim to reveal the unseen and predict the future, can be divided into two main categories:

1.    Those who have no real knowledge or secrets but depend on telling their customers about general incidences which happen to most people. They often go through a series of meaningless rituals, and then make calculated general guesses. Some of their guesses, due to their generality, may come true. Most people tend to remember the few predictions that come true and quickly forget the many which do not. This tendency is a result of the fact that after some time, all the predictions tend to become half-forgotten thoughts in the subconscious until something happens to trigger their recall. For example, it has become common practice in to publish, at the beginning of each year, the various predictions of famous fortune-tellers. When a survey was taken of the various predictions for the year 1980CE, it was found that the most accurate fortune-teller among them was only twenty-four percent (24%) accurate in her predictions!

2.    The second group are those who have made contact with the Jinn. This group is of most importance because it usually involves the grave sin of Shirk (associating others with Allah), and those involved often tend to be fairly accurate in their information and thus present a real Fitnah (trial and temptation) for both Muslims and non-Muslims alike. Not only is the practice of astrology Haraam (forbidden by Islamic Law), but so are visiting an astrologist and listening to his predictions, buying books on astrology and reading one’s horoscope. Since astrology is mainly used for predicting the future, those who practice it are considered fortune-tellers. Consequently, one who seeks his horoscope comes under the ruling contained in the Prophet’s statement: "The daily prayers of whoever approaches a fortune-teller and asks him about anything will not be accepted for forty days and nights." [Muslim]

The punishment in this Hadeeth is simply for approaching and asking the astrologist, even if one is in doubt about the truth of his statements. When one is in doubt about the truth or falsehood of astrological information, this entails that he is in doubt about whether or not others know the unseen and the future besides Allah. This is a form of Shirk, because Allah has clearly stated (what means): "And with Him [i.e., Allah] are the keys of the unseen; none knows them except Him." [Quran 6:59] As well as (what means): "Say (O Muhammad): 'None in the heavens and earth knows the unseen except Allah…'" [Quran: 27:65]

If, however, one believes in the predictions of their horoscopes, whether spoken by an astrologist or written in books of astrology, he falls directly into Kufr (disbelief) as stated by the Prophet

: "Whoever approaches an oracle or fortune-teller and believes in what he says, has disbelieved in what was revealed to Muhammad." [Ahmad & Abu Daawood]

Like the previous narration, this one literally refers to the fortune-teller and it is just as applicable to the astrologist. Both claim knowledge of the future. The astrologist’s claim is just as opposed to Tawheed (Islamic Monotheism) as the ordinary fortune-teller. He claims that people’s personalities are determined by the stars, and their future actions and the events of their lives are written in the stars. The ordinary fortune-teller claims that the formation of tea leaves at the bottom of a cup, or lines in a palm, tell him the same thing. In both cases, individuals claim the ability to read in the physical formation of created objects, knowledge of the unseen.

Belief in astrology and the casting of horoscopes are in clear opposition to the letter and spirit of Islam. It is really the empty soul, which has not tasted real Eemaan (belief) that seeks out these paths. Essentially these paths represent a vain attempt to escape Qadar (fate).

These ignorant believe that if they know what is in store for them tomorrow, they can prepare from today. In that way, they may avoid the bad and ensure the good. Yet, Allah’s Messenger

was told by Allah to say (what means): "…If I knew the unseen, I could have acquired much wealth, and no harm would have touched me. I am not except a warner and a bringer of glad tidings to a people who believe." [Quran 7:188]

True Muslims are, therefore, obliged to stay far away from these areas. Thus, rings, chains, etc., which have the signs of the Zodiac on them should not be worn, even if one does not believe in them. They are part and parcel of a fabricated system which propagates Kufr and should be done away with entirely. No believing Muslim should ask another what his star-sign is, or attempt to guess what it is. Nor should he or she read horoscope columns in newspapers or listen to them being read. Any Muslim who allows astrological predictions to determine his actions should seek Allah’s forgiveness and renew his Islam.