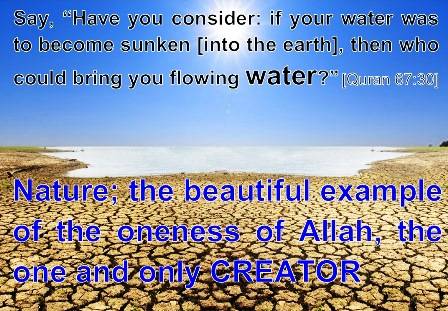 "Tawheed" and "'Adl"  Unity and Justice

Allah's Tawheed or Unity is central to the Quranic message, and with that unity comes perfect justice. The idea that everything in this world, indeed everything in all of the many worlds that surround us in space and time, and perhaps other dimensions as well, stems from a single source, is a powerful message of unity. Since all of us, and everything around us, are creations of the one Creator – Allah, we must respect the hidden unity that links the many to The One, and recognize that whatever we do to that which is outside of ourselves, we are ultimately doing to ourselves. If we abuse other people, we abuse ourselves—though the full effects of that abuse may not be apparent until the last day. Likewise, if we abuse nature, we also abuse ourselves, and the consequences of that abuse will in the end be fully felt, and perfect justice dispensed by Allah when we return to Him. Those who reject this knowledge rationalize their behavior by saying, "Well, I'm not going to curb my wasteful lifestyle now, because this catastrophe you're predicting probably won't happen during my lifetime." They do not believe that they will suffer the full consequences of their own actions. But the Quran stands as a clear warning that this is not the case, amplifying the inner voice of conscience Allah built into our deepest nature: And we can see in the Quran as Allah Says (what means): "Then each will see what he had done in the past; and they will turn to Allah, their true Lord, and all the lies they had fabricated will be of no avail to them." [Quran, 10:30]

'Zuhd' is an especially hard word to translate into English because the closest cognate, asceticism, carries traces of Christian attempts to "mortify the flesh." Mortification implies self-torture aimed at making us feel revulsion for our physical, earthbound existence. Islam, however, has no such tradition of self-torture. Instead, Zuhd describes a balanced, judicious approach to abstaining from excesses of ease, comfort and pleasure-seeking, in order to detach the soul from potential addictions and instead turn towards Allah. The wise detachment of Zuhd is meant to be practiced not just by a few self-flagellating monks in hair shirts, but by each and every Muslim. That is why fasting in the month of Ramadan is a universal requirement, not an option: Fasting is a perfect lesson in moderation and self-control, as well as compassion for the less-fortunate. This moderate, universal Zuhd could, Allah willing, help us create a genuinely sustainable world, by healing the current order at both the spiritual and physical levels. (These two levels, of course, are intimately connected.) Zuhd teaches us that giving up our excesses is a blessing, not a curse—especially if we do it voluntarily, rather than waiting for Allah-given natural limits to do it for us. In practicing Zuhd, we are following a very important Sunnah. Though the leader of a powerful, rapidly-expanding community, the Prophet Muhammad

lived and died in a small, hardly-furnished house, leaving behind virtually no material possessions. He was moderate in his consumption of food and drink, careful not to waste a drop of water when performing ablutions, fasted frequently, and prayed devoutly late into the night. Let us pray that humanity soon discovers the wisdom of his example.

Islam prescribes certain specific obligations: Bearing witness that there is none worthy of worship but Allah and that Muhammad is the messenger of Allah, Praying, Alms giving, Fasting and Performing Pilgrimage are the best known. Fardh has been viewed by some scholars as involving general as well as specific obligations, that is, obligations from Allah that may not be specific enough to be enforceable by the community: being charitable, just, and merciful, remembering Allah, putting ones family, community, and planet ahead of oneself, and so on could be viewed as obligations in the general sense. In the more common, specifically legal sense of fardh, there are obligations incumbent on everyone (fardh al-'ayn) and others that can be fulfilled for the whole community by some of its members (fardh al-kifayah). Because these obligations are from Allah, they demand to be taken seriously. Thus the Islamic world-view emphasizes the notion of obligation, in contrast to the Western preoccupation with individualism and rights at the expense of obligations and responsibilities. The notion of obligation is obviously essential to any serious attempt to save our environment. If we are governed by the principle of individual "rights" we will not want to infringe on anyone's "right" to consume more and more material goods—and to cut down forests, dig mines, exterminate animals, spew pollutants, and ravage ecosystems in pursuit of those goods. An ethic built on obligations before rights, like the Islamic ethic, seems better suited to a world in which is more than six billion people pursuing their "right" to unlimited material consumption will spell doom for the planet as a whole. In particular, the obligation of the fortunate to care for the less fortunate must be universally acknowledged if we are to limit planetary consumption in a humane, rational manner. Clearly the Islamic ethic of obligation is well suited to saving the world by correcting the unbalanced Western, and especially American, ethic of "rights" whose bottom line is the right of the wealthy and powerful to unlimited consumption of the planet's resources.