The spread of Islam in Africa 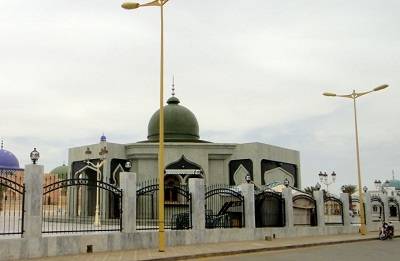 Ancient Ifreeqiyyah () and its Boundaries

The Arabs call 'Ifreeqiyyah.' They gave this name to the Eastern part of Barbary and called the western part of the Maghrib, the name used until today. The Romans called it Africa after the destruction of . They included Barbary in it and later called the whole continent as . Al-Bakri, a Muslim historian, interprets the word Ifreeqiyah as the Queen of Heaven. Al-Mas'oodi, another Muslim historian, holds another view that the name Ifreeqiyah  is given after the name of Ifrigos bin Abraha bin Al-Raysh, who built the town of  in the Berber country. The famous Arab historian Ibn Khaldoon says that the name Ifreeqiyah was given after Ifreequs bin Qays bin Sayfi, one of the Kings of Yemen. Ibn al-Shabbat says that the name is derived from the Arabic word Bariq meaning 'clear,' because "in there are no clouds in the sky".

(may Allah exalt his mention) who was born in 571 C.E., preached the message of Islam until his death in 632 C.E. The early contact of Islam with began during the lifetime of the Prophet

. He taught the unity of Allah and abolition of priesthood. The Qurayshites, who were the priestly class of the Arabs, therefore began to oppress him and his early followers. When their oppression went beyond limits, the Prophet

advised them to migrate and seek shelter in some other part of the world. Acting on his advice, some of them migrated to Abyssinia and sought refuge with Negus, a Christian king of in the year 615 C.E. It was significant that the first shelter of early Muslims was in and their host who stood firm with them was an African.

These first Muslim-Arab refugees were pursued by their oppressors, the Qurayshites, even up to the court of Negus to take them back to . In spite of the appeal of the Qurayshite delegation, Negus did not leave the Muslims in the hands of their enemies; on the contrary, he welcomed them and granted them shelter and security.

Africa on the Eve of the Expansion of Islam

The power of the Roman Empire was sapped by religious discord. By the time Prophet Muhammad

began his mission, the Egyptians and Syrians had partially severed their active link with the Roman Empire. In the year 634 CE, when the Muslim volunteers advanced with their faith toward new territories, the first Caliph, Abu Bakr, may Allah be pleased with him, instructed them saying: "Do no harm to women, children and old people, refrain from pillage and the destruction of crops, fruit trees, and herds, and leave in peace Christian monks and authorities as might be found in their cells."

The state of North Africa, on the eve of the Arab conquest, was far from being stable. The Latin-speaking provinces were governed from Constantinople. Although the ecclesiastical policy of the House of Heraclius favoured the Christology known as Monothelitism, or the doctrine of the single will, the Pope, under whose jurisdiction the African church fell, frowned upon it and repudiated it as heretical.

When the Arab conquest began in 647 A.D., the Exarch Gregory had already denounced allegiance to Constantinople and had proclaimed himself an Emperor. The peasantry was so oppressed that they had no inclination to fight for their masters. The native Berbers were highly disorganised and lacked leadership. Only those Berber clans which had accepted a settled life as cultivators carried some Byzantine influence, but the others were kept beyond the reach of civilisation. Christianity was not planted among them on a firm footing although there was some missionary work done. It is believed that the modern Tauregs were once Christians.

In Egypt, the native Copts were instructed by their bishop in Alexandria to offer no resistance to the Arab Muslims marching toward Egypt. "This is not surprising," says Professor Phillip Hitti, in view of the religious persecution to which they (Copts) as Monophysites had been subjected by the official Melkite (Royal) Church.

During the days of Jaahileeyyah (the pre-Islamic period of ignorance), 'Amr bin Al-'Aas, may Allah be pleased with him, had made many caravan trips to Egypt and was familiar with its routes and cities. The following portrait of the advancing Muslim Arabs has been recorded by an envoy of Cyrus:

"We have witnessed a people, to each and every one of whom death is preferable to life, and humanity to prominence, and to none of whom this world has the least attraction. They sit not except on the ground, and eat not but on their knees. Their leader (Ameer) is like unto one of them: the low cannot be distinguished from the high, nor the master from the slave. And when the time of prayer comes, none of them absents himself; all wash their extremities and humbly observe their prayer."

The fall of Egypt made the Byzantine provinces, bordering on its west, defenceless. Later Bargah and the Berber tribes of Tripoli were included in the Islamic provinces without any resistance.

who is revered to this day as the founder of Muslim Africa. He planted a permanent camp at Qayraawaan in 670 C.E., and thus came closer to the Byzantines and the Berbers. About ten years later, he undertook his famous march to the west and boldly claimed the whole African continent for Islam. This brought Muslims almost close to Europe.

It is reported that 'Uqbah began his march from Qayraawaan, avoiding the Byzantine towns north of the Awras, and went toward the Central plateau and pushed beyond the Atlas Mountains and went as far as Tangier, and then turned south to Morocco. In the march, he followed the course of the river Sus to the point where it discharges into the Atlantic Ocean.

Muslim geographers and historians have provided us with excellent records about Africa. Ibn Battootah will always be remembered as the earliest Muslim scholar to travel through the thick forest of Africa. The Europeans named the forest as 'The white man's grave', even in the early 19th century. Early geographers, like Al-Khawarzimi, have indicated various names of African territories. The famous Muslim Scholar, Ibn Hawqal in his book Soorat al-Ardh has discussed the lifestyle of the black people. More copious material on West Africa is available from Al-Bakri who wrote in 1067 C.E., and later Ibn Khaldoon.

Author: Prof. A. Rahman I. Doi