The establishment of the first Islamic state -II 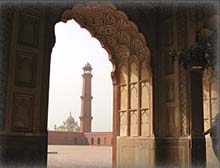 A Charter of Islamic :

Just as the Prophet

(may Allah exalt his mention) had established a code of brotherhood amongst the believers, he was also keen on establishing friendly relations between the Muslims and non-Muslim tribes of . He established a treaty aimed at ruling out all pre-Islamic rancor and inter-tribal feuds. He was meticulous not to leave any area in the charter that would allow pre-Islamic traditions to sneak in or violate the new environment he wanted to establish. Herein, are some of its provisions.

“In the Name of Allah, the Most Beneficent, the Most Merciful. This is a document from Muhammad, the Messenger of Allah, concerning the Emigrants (Muhaajireen) and the residents of Al-Madeenah (Ansaar) and those who followed and strove with them.

It was solely by his wisdom and dexterity, that the Prophet

erected the pillars of the new society. This phenomenon no doubt left its mark on the virtuous Muslims. He used to bring them up in the light of Islamic guidance, he sanctified their persons, enjoined them to observe righteousness and praiseworthy manners and was keen on infusing into them the ethics of amity, glory, honor, worship and obedience to Allah and His Messenger.

The following are some of the virtues that he

used to inculcate in the minds of the Companions:

A man asked the Messenger of Allah

which of the merits is superior in Islam. He

remarked:  "That you provide food and extend greetings to one whom you know or do not know."

‘Abdullaah bin Salaam, may Allah be pleased with him, said: “When the Prophet

arrived in Al-Madeenah, I went to see him and I immediately recognized through his features that he would never be a liar. The first things he

said were: ‘Extend peace greetings amongst yourselves, provide food to the needy, maintain relations of kinship, observe prayer at night while people are asleep, then you will peacefully enter the Garden ().’"

also said:  "A Muslim is the brother of a Muslim; he neither oppresses him nor does he fail him. Whosoever removes a worldly grief from a believer, Allah will remove from him one of the griefs of the Day of Judgment. Whosoever shields a Muslim, Allah will shield him on the Day of Resurrection. "

also said: "Abusing a Muslim is an outrage and fighting against him is disbelief."

"To remove something harmful from the road, is charity."

also said:  "He is not a perfect believer, who goes to bed full and knows that his neighbor is hungry."

also said:   "Show mercy to people on earth so that Allah will have mercy on you in heaven."

also said:    "Try to avert fire even by half a date (in charity); if not, then by tendering a good word.”

also said:  "Clothing an under-clad Muslim, entitles you to a garment from Paradise; feeding a hungry Muslim will make you eligible (by Allah’s Will) for the fruits of Paradise, and if you provide water to a thirsty Muslim, Allah will provide you with a drink from ‘the Sealed Nectar’. "

also said:  "Do not have malice against a Muslim; do not be envious of other Muslims; do not go against a Muslim and forsake him. O slaves of Allah! Be like brothers with each other. It is not allowed for a Muslim to desert his brother for over three days.”

used to promote the habit of abstention from asking others for help, unless one is completely helpless. He used to talk to his Companions about the merits, virtues and Divine reward in observing the prescribed acts of worship. He would always bring forth substantiated proofs in order to link them physically and spiritually to the Revelation sent to him. Hence, he would apprise them of their duties and responsibilities in terms of the call of Islam, and at the same time emphasize the importance of comprehension and contemplation.

That was his practice in order to boost their morale and inspire them with noble values and ideals, so that they could become models of virtue to be emulated by subsequent generations.

‘Abdullaah bin Mas‘ood, may Allah be pleased with him, once said: “If you are willing to follow a good example, then you can take recourse to the tradition of the people who have passed away, because the living are likely to fall an easy victim to oppression (so they might waver in faith). Follow the steps of the Companions of Muhammad

. They were the best in this nation, the most pious, the most learned and the least pretentious. Allah chose them to accompany the Prophet

and establish His religion. Therefore, it is imperative to get to know their grace, follow their righteous way and adhere as much as you can to their manners and assimilate their biographies. They were always on the straight path.”

Then, there is the example of the Messenger of Allah

whose moral attributes, perfection, talents, virtues, noble manners and praiseworthy deeds, entitle him to occupy the innermost portions of our hearts, and become the dearest example that the self yearns for. He

would hardly utter a word, and his Companions would race to assimilate it and work in its light.

wanted to build a new society -- the most wonderful and honorable society ever known in history. On these grounds, he strove to resolve the longstanding problems, and later gave humankind the chance to breathe a sigh of relief after a long wearying journey in dark and gloomy avenues. Such lofty morals lay at the very basis of creating a new society, with integrated communities that were immune to all fluctuations of time and circumstances, and powerful enough to change the whole course of humanity.

Summarized from: The Sealed Nectar