Manhood in the Quran and the Sunnah - II 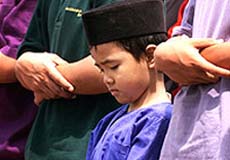 Qualified righteous men are the backbone of missions, the spirit for progress and the focal point of reformation. There can be countless factories of weapons and ammunition, but if there are no men to use the weapons being produced, there will be no ability to fight. The finest educational curricula can exist, but it takes real men to implement and teach them; one can create many committees to carry out a project, yet these will accomplish nothing if there are no devoted men on these committees.

Reformation and successful cultivation can only be achieved by men who experience and live it - and not merely by reading books on the subject. It is only men with zeal and devotion that accomplish projects, regardless of the number of committees that they may be members of.
A generation that possesses real manhood and righteousness can only be generated through being cultured on firm belief, strong morals and sound Islamically based customs. A generation that grows up surrounded with destructive doubts, immorality, disbelief and obscenity will never discover real manhood.
The world did not see real manhood in its finest and definitive form except in the unique generation that was nurtured by the great Prophet

. That generation experienced great fear; they were not materialistic; they were not deceived or seduced by temptation; they were not scared by warnings or threats from others; nor were they proud and arrogant after victories and they would never give up after suffering setbacks.
A young boy entered into the palace of one of the Umayyid Caliphs to address him on behalf of his tribe. The Caliph said: “Let an older man come forth to represent your people!” The boy said, “O leader of the believers, if leadership was gained by virtue of age, then there would have been many others worthier than you for the Caliphate.” These are fine examples of maturity and manhood despite tenderness of age and we Muslims have had many such examples throughout history.
Building the qualities of manhood in our children
The following are some of many Islamic points that will help develop manhood in a child’s personality:
·        Nicknames: Calling the child Abu so and so or Umm so and so increases their sense of responsibility and makes them feel older. The Prophet

used to give nicknames to children as Anas Ibn Maalik, may Allah be pleased with him, said: “The Prophet

had the finest manners; and I had a brother who was called Abu ‘Umayr who was just weaned; whenever he was around the Prophet

he would say: “O Abu ‘Umayr, what did the Nughayr do?”
·        Taking the child to the gatherings of adults also develops manhood in their personalities. It adds richness to their understanding and improve their way of thinking. This was the practice of the companions, may Allah be pleased with them, who used to take their children to the gatherings of the Prophet

.
·        Relating to children historical stories, Islamic battles and heroic victories builds courage and bravery in them, which is one of the most important factors of manhood. ‘Urwah Ibn Az-Zubayr said, “Az-Zubayr Ibn Al-‘Awwaam (his father) had two children. He took one of them to some of the battles and the other would play with the battle-wounds on his father’s shoulder (when he returned).”
·        Teaching children to respect elders also develops manhood in the child. Abu Hurayrah, may Allah be pleased with him, narrated that the Prophet

was brought a cup to drink from and he had a child to his right and elders to his left. After he drank he said to the child, “Do you permit me to give this to the elders before you?”
·        Teaching children manly sports like swimming, horse riding and shooting. ‘Umar ibn Al-Khattaab, may Allah be pleased with him, wrote to Abu ‘Ubaydah Ibn Al-Jarraah, may Allah be pleased with him, instructing: “Teach your children how to swim!”
·        Avoiding things that would soften them up or make them resemble females, like music, dancing, wearing silk or gold and anything else that is feminine.
·        Refraining from insulting them publicly, encouraging them to be participative and making them feel important.
·        Greeting them with Salaam. Anas Ibn Maalik, may Allah be pleased with him, said: “The Prophet

passed by a group of children and greeted them with Salaam.” [Muslim]
·        Taking and valuing their opinions.
·        Giving them responsibilities which are suitable for their ability and age and telling them secrets. Anas bin Maalik, may Allah be pleased with him, said: “The Prophet

came to me while I was playing with other children and greeted me with Salaam, then he sent me on an errand which delayed me from getting to my mother on time. When I finally reached home, she asked: ‘What delayed you?’ I replied: ‘The Prophet

sent me on an errand.’ She asked: ‘What was it?’ I replied: ‘It is a secret!’ She said, ‘Do not tell the Prophet’s secret to anyone.’” [Muslim]
·        Instilling courage in them by means such as by delivering speeches.
·        Attaching great importance to chastity and decency and avoiding fashionable clothes, stylish haircuts, and modern ‘mannerisms’.
·        Keeping them away from luxury, laziness, unnecessary rest and idleness. ‘Umar ibn Al-Khattaab, may Allah be pleased with him, said: “Toughen up, luxury does not last for ever.”
·        Keeping them away from sinful gatherings that involve music and other prohibitions because this contradicts manhood and integrity.

Manhood in the Quran and the Sunnah - I