Entering the marital bond - I: Finding a suitable spouse 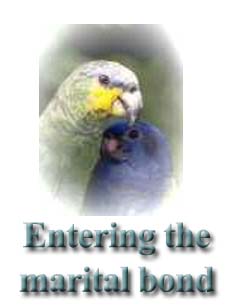 said: "Whoever marries has completed half of his faith. So let him have fear of Allah in the remaining half." [At-Tabaraani]

As an act of worship, Muslims should make the intention to please Allah, Almighty, during this process and act in accordance with His laws.

Unfortunately, in this time, more and more Muslim marriages are crumbling, primarily due to the fact that they were not in conformity with the laws established by Allah. The intention to please Allah was not there from the beginning.

As this is a rather immense topic, it will be spread out over several issues. Some of the initial components in the process are considered in the following, with the focus on women who are entering the marital bond.

The presence and guidance of a Wali (guardian - father or whoever takes his place) is one of the conditions required for soundness of a marriage contract. The Prophet

said: "There is no marriage except with a Wali." [Ahmad, Abu Daawood and At-Tirmithi] He

The Wali is the one who will be responsible for finding a suitable spouse for his ward, one who is religious and an appropriate match. The Wali must be male, mature, of good moral character, and of the same religion as the woman.

In the ideal situation, the Wali should be the closest male relative of the woman, so first it has to be the father, if not then it passes to the closest male relative on the father side, her grandfather, then her son, then her full brother, then her half brother, then his sons, then paternal uncles, then their sons, then the father paternal uncles, then the Muslim Judge. For women who have entered Islam from another religion, however, it is not acceptable for her non-Muslim father or other non-Muslim relative to act as her Wali. In this case, the responsibility falls upon the leader of the community. A woman cannot choose any person for her Wali. The Prophet

said: "There is no marriage but with a Wali. And the ruler is the Wali for one who does not have a wali." [Ahmad and others]

Ibn 'Abbaas, may Allah be pleased with him, narrated that a young virgin woman came to the Prophet

and stated that her father had married her and she disliked it. So the Prophet

gave her the option (to annul the marriage or remain in it). [Abu Daawood and Ahmad]

The relationship between the woman and her Wali is ideally one of cooperation involving mutual respect and consideration.

Finding a Spouse with Faith and Piety:

said: "If someone whose religion and character you are pleased with comes to you (to marry your daughter or ward) then marry (her off to) him. If you do not do so, there will be commotion on the earth, and a great deal of evil." [At-Tirmithi and Ibn Maajah]

The Wali should assist the woman in finding a spouse who has strong faith and piety, which is reflected in behavior.

The happiness of the marriage often rests upon this important element. One of the goals of marriage is to find comfort, repose, and security in the relationship. This goal is more likely to be achieved if each spouse has fear of Allah and adheres to Islam.

Unfortunately, women often look for a man who has wealth and letters behind his name (M.D., Ph.D., etc.) assuming that this will bring them happiness. Although there is no harm in considering these things, yet it should not be given first priority. How helpful will that wealth and those letters be when the person is being disrespectful and uncaring towards his wife? How beneficial will he be in helping her to fulfill her obligations to Allah?

Women should carefully arrange their priorities when it comes to selecting a spouse, for the success and happiness of the marriage may depend on this.

Payment of the Mahr is also a necessary condition for soundness of a marriage contract. It is given to the wife as a way of honoring and respecting her and as a symbol of the husband's commitment to provide for and take care of his wife.

Allah Says (what means): "And give the women (upon marriage) their bridal gifts graciously." [Quran; 4:4]

This verse and others establish the obligatory nature of the Mahr. There is no minimum or maximum amount of Mahr stated explicitly in either the Quran or Hadeeth.

Anything of value is acceptable as Mahr, regardless of whether it is something material or something non-material (if the person lacks wealth). The prophet

said: "Search for something, even if it just be a ring made from iron." [Al-Bukhari and Muslim] In fact, the Mahr could be knowledge of the Quran as related in a popular narration. The Prophet

accepted the dower of a person's knowledge of Quran. He said: "Go for I have put her under your charge (in marriage) due to what you have of the Quran." [Al-Bukhari and Muslim]

There is no maximum amount of dower as Allah Says (what means): "But if you want to replace one wife with another and you have given one of them a Qintaar (great amount of gold) in gift, do not take (back) form it anything." [Quran; 4:20]

A Qintaar is a very large amount of gold, which implies that it is allowed to give such large amounts. The Caliph Umar, may Allah be pleased with him, however, did advise the people at one time not to be excessive with regard to a woman's dower. The Prophet

also encouraged people to be easy in this area. He

said: "The best Mahr is the one which is easiest (to be paid)." [Al-Haakim and Ibn Maajah]

Some women request enormous amounts of money, jewelry, and goods from their prospective husbands, oftentimes making it impossible for the men to fulfill these requests. Men are actually foregoing or postponing marriage because they are unable to pay the "going rate" or to find a woman who is willing to accept a lesser amount.

This creates a great deal of corruption, trial and temptation not only for individuals, but also for society as a whole. Women should look beyond their own personal desires and interests and consider loftier values and benefits.