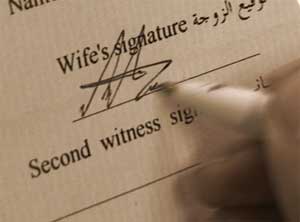 The necessary components of the marital process:

This article, discusses some of the important issues to consider when entering the bond of marriage. This includes the marriage contract and witnesses to the marriage. It is imperative to remember that whatever endeavor a person engages in, his or her intention should be purely for the sake of Allah, Almighty. For something as serious as marriage, this should be obvious. The correct intention will ensure that the union is blessed by Allah and protected from difficulty and tribulation. Our sole purpose in life should be to seek the pleasure of Allah in all that we do. If this goal were the focus, we would see many happy, smiling married couples.

The marriage contract is a necessary component in the marital process. Marriage itself is actually considered to be a contract agreed upon by the two parties. It is a binding, permanent agreement that can only be broken through the process of divorce.

It should be entered with seriousness, and as with any contract, the best attempt should be made to fulfill the obligations and responsibilities due to the other party.

All scholars agree that the offer by one party and acceptance by the other is an essential part of the marriage contract. Most of these scholars also say that the offer must be from the woman’s side (the Wali - the guardian or one who represents him) and the acceptance from the man during the process of the contract. The majority of the scholars also say that it is necessary to have the presence of both the prospective husband and the Wali during the process. The actual presence of the woman to be wed is external to the whole process.

It is essential to mention here that the consent of the Wali is a condition without which the contract is void.

The marriage contract itself may simply be in spoken form, although it may also be completed through writing. Any wording that clarifies the intention and goals of the contract would be acceptable. It is important to mention that when the contract is entered into, the aspects pertaining to marriage in the Sharee’ah (Islamic Law) become binding upon each person, regardless of whether or not they are stated in the contract. These aspects would include the rights and responsibilities of each party, such as the husband providing sustenance for his wife and the wife being obedient toward her husband and so forth.

Certain customs that are known and accepted by everyone can also take the status of law and be considered binding on the parties. These, of course, would only be acceptable if they do not contradict the Sharee’ah. Some examples may be the custom of the husband providing furniture for the house or the bride being taken to the home of the groom.

Other stipulations may be added to the marriage contract if both parties agree. These conditions cannot contradict the Sharee’ah nor can they bring harm to anyone. The primary purpose of these additions should be to avoid any conflict or hardship in the future.

Those who accept the stipulations must complete the condition or the husband or wife has right to nullify the marriage. Allah Says (what means): “O believers, fulfill the contracts.” [Quran; 5:1]

said: “The Muslims must act upon their stipulations.” [Abu Daawood and Al-Haakim]. It is necessary to mention that some scholars are of the opinion that additional conditions cannot be added to the marriage contract.

The majority of scholars agree that the presence of two witnesses is an obligatory aspect of the marital contract. The Prophet

said: “There is no marriage save with a guardian and two (just) witnesses.” [Al-Bayhaqi]

allows for non-Muslims witnesses if the marriage is to a non-Muslim woman).

The reason for having Muslim witnesses is that the contract is a serious one and is considered to be a religious contract.

As a woman eagerly prepares for her wedding day, buying clothes and accessories, beautifying herself, informing family and friends, she should reflect on the serious nature of the contract that she is about to enter. It is a lifelong, binding contract that entails many duties and responsibilities. She should become aware of the elements that are necessary for completion of this bond (as outlined above and in the previous article) as detailed in Sharee’ah, and learn about her role as a wife and companion. She should also be informed about the rights that are due to her from her husband. It is a beautiful reciprocal relationship in which the rights of one party become the responsibility of the other. There are many books available on this topic and it would be wise to read some of these as part of the preparation. In Islam, it is not enough to just get married. One must have the knowledge to enter the union with wisdom and understanding and a deep commitment to making it successful.

Equipped with the right intention and knowledge, there should be little room left for Satan to nudge between the man and woman who have promised to love and honor each other all the days of their lives… and in the Sight of Allah.