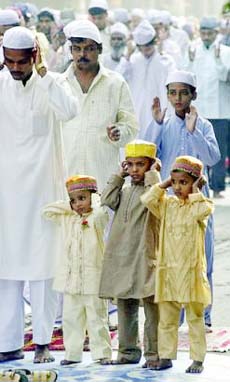 Overall, the Muslims of India make up 13.4 percent of the country's population of over one billion. Islam is 's largest minority religion.

's Muslim communities tend to be more urban than rural. In many towns and cities in northern , Muslims are one-third or more of the population. The largest concentrations of Muslims live in the states of Bihar, , and Uttar Pradesh. According to the country's 2001 census there is 138.188.240 Muslims in .

Not only does the Taj Mahal, the most famous symbol of India, commemorate the love for a Muslim queen, but the very name India is an Anglicized version of the Arabic name Hind which Muslim scholars started using for the area beyond Sindh (roughly the east of Pakistan today).

In the biggest Indian minority is a victim of deprivation. Whether it is legislative assemblies educational institutions, government jobs, the problem of security in case of riots, representation in political organizations, posts in policy planning and decision-making groups or other pressure groups there is acute shortage of Muslim representation everywhere, resulting in constant social tension and problems in governance.

Some challenges the Indian Muslims face:

1. Communal riots against Muslims are among the biggest tragedies of this independent, secular democracy. Wherever Muslims have acquired a relatively better economic position, these riots send them back to the starting point. There have been 249 riots per year according to Indian government statistics. Senior Indian journalist, Khuswant Singh notes that in all communal violence that has taken place in India since Independence in the 1940s, over 75 per cent of the causalities - in terms of lives and property destroyed - were Muslim.

2. The second important problem is the state of present textbooks in the Indian education system which have become very aggressive in teaching Hinduism. This hits Muslims' faith, culture, civilization, language and way of life. The educational syllabi have prescribed course books in all states, which are replete with matters pertaining to the faiths of the majority community, mythological and other stories of Hindu gods and goddesses against the principles prescribed in the Constitution. Obviously all these things are negations of Islamic beliefs and teachings, especially about the Oneness of God Almighty. Hence there is no doubt that these things are causing great concern to the Muslims.

The rewriting of history is done in a way that continues to fuel the non-secular, chauvinistic Hindu perspectives, causing the new generation of Indians to shape their behavior towards minorities in a very hostile way.

3. The economic problem: More than fifty percent Muslims are leading a life below the poverty line as compared to thirty-five percent of Hindus who live below the poverty line. Because of a general environment of hostility against Muslims, decent employment in the private sector is becoming increasingly difficult for Muslims, while in the public sector there is no encouragement for Muslims either. The future of Muslim professionals and its working class, traders etc has been very greatly affected.

Today very few Muslims are found in government jobs. A recent survey shows that there are only eight Muslim police chiefs in 's 591 districts. That is .01% as compared to 12% of the Muslim population in . The situation of other departments is also worsening day by day.

4. Education: The active discrimination Muslims face in the private and public sector of the job market, has forced them to pay less attention to school education which, in , is connected with the job market. In the educational field therefore, Muslims are very backwards.

5. Urdu language. Another major problem of Muslims of India is that of the Urdu language. The Urdu language was born as a result of the interaction and cohesion of different languages, nations, cultures and civilizations and is a mixture of some old languages like Sanskrit, Arabic, Persian, Turkish etc. Urdu is almost a dead language now as far as the medium of instruction is concerned. It is not tolerated even in the primary and secondary stages of education.

The Muslims of India are very vulnerable in a country which describes itself as the world's "largest secular democracy". Muslims today remain poorer, less educated and less empowered in .