The spread of Islam in Southeast Asia 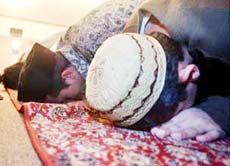 The actual timing and introduction of the Islamic religion and its practice to is subject to debate. European historians have argued that it came through trading contacts with whereas some Southeast Asian Muslim scholars claim it was brought to the region directly from Arabia in the . Other scholars claim that Muslim Chinese who were engaged in trade introduced it.

Whatever the source, scholars acknowledge that Muslim influence in is at least six centuries old, or was present by 1400 A.D. Some argue for origins to at least 1100 A.D. in the earliest areas of Islamic influence, such as in Aceh, northern Sumatra in .

Whatever exact dates and sources one chooses to support, there is no doubt that Islamization of many peoples in present-day southern and the southern occurred within a few hundred years. The process of religious conversion absorbed many pre-existing Southeast Asian beliefs (often referred to as 'animism', or the belief in the power of invisible spirits of people's ancestors and the spirits of nature to influence the fortunes of humans on earth).

The scholar Anthony Reid, Professor of History at the of argues that this process of Islamization (and Christianization in the ) occurred rapidly in especially during the period of 1550-1650.

For example, Islam became strong in eastern Indonesia, especially coastal kingdoms of Sulawesi, Lombok, Kalimantan, Sumbawa, Makassar, and in Sulu and Magindanao (Cotabato Province) in the southern Philippines from 1603-1612. This does not mean that rulers and their subjects in these areas were totally devoted to upholding all of the basic rules of Islam. It means that Islamic influence was present, as evidenced through ruling elites' obligation to renounce the consumption of pork and to pronounce the daily five prayers. Some also practiced circumcision during this period.

Islam's influence and conversion in

In the year 1500, Anthony Reid notes that Islamic influence was present in coastal ports of Sumatra, Java, and . During this period, Muslim rulers tried to balance their patronage of Islam with international traders, urban mosques, and basic adherence to the Muslim doctrine of avoiding pork with their need to sustain rural peoples' beliefs in animism.

In the year 1590, Islamic writing appears in both Malay and Javanese scripts. This indicates a period of activity by Muslim scholars in select areas who were promoting Islamic beliefs.

Rapid commercialization increased global trade that involved Southeast Asians in extensive travel outside their home areas. Animism, or the belief in spirits, was an intensely 'local' religious form. It was difficult to perform rituals outside of one's own home area, since spirits (ancestral or otherwise) were not 'portable'. The increased global trade influenced indigenous Southeast Asian traders in two ways: 1) they were attracted to new religious forms that were not tied to specific places; and 2) they were impressed by the wealth and apparent materialistic power and talents of foreign traders.

Wealth and power, by indigenous animistic beliefs, signaled enhanced spiritual power. In other words, traders began to contemplate Islam and Christianity as alternative, in some cases superior, forms of religious belief. The success of European traders and Arabic traders during this period provided the basis of attraction to new ritual practices. In many cases, new religious practices were absorbed into the existing Southeast Asian ritual practices.

Southeast Asian peoples came into direct contact with Muslim traders who had been not just to but also to . Arabic scholars also came to and facilitating information about the new religion. In the in contrast, Spanish missionary priests were directly involved in spreading Christian beliefs among the local populations.

The successful spread of Islam in and the owed much to the introduction of the Noble Quran and other Islamic books and references. Animistic beliefs, or those indigenous to prior to the impact of Hindu or Theravada Buddhist beliefs, had no such written legacies.

Written doctrines enable religions to establish durability and a lasting impact on people; oral religious traditions easily change and adapt to new circumstances. While these great new religious traditions took a toll on local beliefs, and in that sense were intrusions of foreign influence in they also left great impressions.