Secularism and its dangers -II 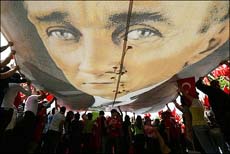 Believers in secularism deal with the aspects of faith and worship according to what Allah Wants, but- at the same time- they legislate rules other than the rules set by Allah Almighty. In fact, this is the reality and the basis of Shirk (associating partners with Allah), because the people of Jaahiliyyah (the pre-Islamic paganism) did not object to the existence of Allah. Allah Says (what means): "And if you would ask them: 'who created the heavens and the Earth', they would say: 'Allah.'" [Quran 31:25]

They also used to have some acts of worship, as Allah Says (what means): "And they assign to Allah from that which He created of crops and livestock as a share." [Quran 6:136] Yet, with all of that, what was Allah's ruling regarding such a community? Allah ruled that they were disbelievers, and considered these acts collectively to weigh nothing on the scale of Islam.

and the fight became intensely aggressive until they could not settle it but with physical fights, with the sword as the judge.

The subject and the cause behind all of these long aggressive battles was nothing but that one statement, "La ilaaha illa Allah". A statement that the Prophet

From the first instant when the Prophet

called them to "La ilaaha illa Allah", the immediate answer was as Allah Says in the Quran (what means):  "Has he made the gods only one God, indeed this is a strange thing." [Quran 38:5]

The issue was very clear in their minds, that committing to this statement meant rejecting firmly and giving up completely everything else besides Allah. Everything that they were worshiping such as: idols, the Taghoot of leadership, the tribe, magicians and traditions, all had to be dropped and they had to completely submit to Allah instead. This meant taking all matters, whether minor or significant, big and small in judgment to Allah Alone, with no partners.

Likewise, nowadays we have among us those who say that they are Muslims but they refuse to accept a relationship between religion and dealings in the worldly life, particularly when it comes to dealing with money and materialistic issues.

They shamelessly say that if religious morals were to interfere with the economy they will corrupt and ruin it. Therefore, they are not any better than the people of Prophet Shu'ayb were.

In today’s world, we have a state of ignorance that is worse than that of the pre-Islamic period, but it claims knowledge and civilization. Its advocates accuse those who connect between religion and human social behavior, politics and the economy of being backward and rigid, labeling them as fundamentalists and extremists.

Is this not the reality of the campaign of those who claim to be Muslim from the secularists who have corrupted the people and the land, saying: “Religion and belief is for Allah, but governing the land is for the people”, i.e. separating state from religion?

It is the habit of hypocrites and secularists who claim to be Muslims, to not openly reject and show their enmity to Islam. They use the weapon of the illusion of being Muslim until the time of battle, when they take the Muslims by surprise.

For that, these hypocrites from among the secularists and, those who are like them, launch a campaign to deceive the largest possible number of Muslims and to diminish the small number of people that might expose, interfere and intercept what they are doing.

Those who campaign in the interest of secularism, while practically trying to extract Islam from its roots, slowly try to gain the means of the media to get to masses.

Secularism was born and emerged out of Jaahiliyyah and it is clear disbelief. This fact is not hidden and there is no doubt about it. Those who call for secularism create doubt and confusion deliberately. They know that there is no place for this Jaahiliyyah in the lands and countries of Muslims, unless they are deceptive and confuse the masses of Muslims through their false campaigns that conceal the reality from them. They hide from the common people the matter of their religion. They instigate the common people and the masses of Muslims against the sincere and the righteous who call for Islam, those who warn them of the danger to their religion and their families and expose the reality of secularism.

The fight that has been initiated against the Muslims of Ahlus-Sunnah Wal-Jamaa’ah by these misguided sects who claim to be a part of Islam, must not be taken lightly.

The most dangerous of these have always been the attack of sects with concealed faith, like some deviant sects who have been supported by international monetary forces of the disbelievers to destroy the people of Ahlus-Sunnah Wal-Jamaa’ah. Since the people of Ahlus-Sunnah Wal-Jamaa’ah are the real and practical danger to these international forces, their forts are internally endangered by the secular powers that collated against them from the inside and that fight them both covertly and overtly. This represents the core of the battle between Islam and disbelief in this modern time.

The most dangerous phase of this struggle is uncovering the reality of this evil secular ideology and exposing it to Muslims, so that the way of the criminals who try to deceive them and confuse them with regards to their religion becomes clear to each of them.

Isn't it time for the people of Ahlus-Sunnah Wal-Jamaa’ah to be careful and cautious of these dangers that surround them from inside and outside, and endanger them in this life and the hereafter?

Isn't it time for many of them to give up their old battles and settle petty differences and concentrate their force, power and efforts to confront these challenges?