All roads lead to checkpoints 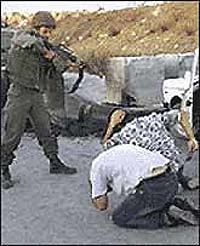 There may have been a period when all roads led to Rome, but for the Palestinian people, all roads lead to checkpoints. The latest checkpoint Palestinians find themselves at is not manned by Israel but rather the ostensible mediator of the Israeli-Palestinian peace process, the Quartet (which is comprised of the US, Russia, the European Union and the United Nations).

Sidelining the needs of Palestinians is not the equivalent of flexibility. Acquiescing to the Quartet's demands may make good headlines in the West, but it will not make life easier for the 3.8 million Palestinians living in the Occupied Territories.

The 86 million dollars the US planned to transfer to Abbas was nothing more than a bribe to sell out his people. The formation of a unity government comprised of Hamas and Fatah, known as the Mecca agreement, was the right step for the Palestinian people, and the right decision for Abbas.

The first goal of the unity government was to end the factional strife between Hamas and Fatah. The second goal was to end the policy of starvation, which was placed upon the Palestinian people by the West and Israel subsequent to the overwhelming election of Hamas in last year's parliamentary elections. The Palestinian government cannot properly function if it lacks the funds to satisfy the salaries of the Palestinian population and their malnourished families.

While Abbas has been viewed as a moderate alternative to Hamas, Israeli Prime Minister Ehud Olmert has found little use for him. Olmert views Abbas as someone to turn to only when the US needs it. Unfortunately, the only time the Bush administration deems it necessary for a rejuvenation of the Israeli-Palestinian peace process is when a fresh debacle sparks increased debate on the Iraq war (i.e. Bush's stunning failure to sell the troop "surge" to the American people).

The other players in the Quarter have done little to exert their influence on the US or Israel. Independently, British Prime Minister, Tony Blair, asserted that there are "sensible" players in Hamas with whom the West can talk with. Convincing the US that moderate forces exist within Hamas is not simply an arduous task; it is a mission Blair is unwilling to take on. This lack of backbone is a problem that plagues the European Union, the United Nations as well as European and Arab states in general.

The latest rekindling of the peace process was nothing more than a few photo-ops for Secretary of State Condoleezza Rice and an official reaffirmation that the Palestinians won't shed their “terrorist” ways. What remained missing from the speeches made by Rice and Olmert as well as the news outlets that covered this week's events were Israel's responsibilities under the first phase of the Road Map. Phase one of the Road Map does call upon the Palestinian people to recognize Israel and renounce violence. But it calls upon Israel to freeze all settlement activity, including activity "needed" for natural growth. Israel, however, has done quite the opposite; it has accelerated settlement activity and has refused to tear down its illegal outposts. Furthermore, even after a dramatic decrease in Palestinian violence and a marked increase in Israeli violence, Israel has done nothing to improve movement conditions throughout the West Bank and continues to use collective punishment against the people of the Occupied Territories.

Under international law and multiple UN resolutions, the conditions of phase one of the Road Map is not a lawful prerequisite to ending the Israeli occupation. The occupation is not a structure Israel has any right to. Ending the occupation is not dependent upon whether the Palestinians officially recognize Israel and its right to exist, nor is it dependent upon the Palestinian people verbally renouncing violence.

Even if one were to look at the terms of the Quartet's demands, in principle Hamas has met the three conditions set forth. Since 2005, the group has abided by a self-imposed cease-fire and has indicated the possibilities of a long-term truce on several occasions. While Hamas does not verbally "recognize Israel," it has admitted that Israel exists and has not sought its destruction, a point which is reinforced by their calls for a long-term truce. Thirdly, Hamas has repeatedly said it is willing to negotiate with Israel through an interlocutor such as President Abbas. Both parties, Hamas and Fatah, base their political platform on the two-state solution, the internationally recognized route to end the Israeli-Palestinian conflict. Hamas is not the same organization it was in 1988 and treating it like is only serves the agendas of those who are disinterested in peace and prefer domination and the continuation of the status quo.

The besiegement of a people can only erode moderation, foment hatred, and bring Palestinians and Israelis back to darker times. This may be the plan for many in the Israeli administration and it surely bodes well for many in the US administration, but it does nothing for peace, and only dims the prospects of a future that must be met with an end to occupation, an end to economic sanctions, and a beginning of reconciliation based on justice for both peoples.