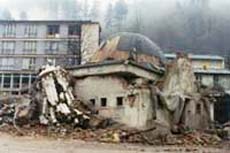 Bosnian Muslim and Croat leaders have voiced disappointment at the International Court of Justice's decision to clear Serbia of genocide in Bosnia, while Serbs have expressed relief at the verdict.

The highest UN court said Serbia had not planned or carried out in the 1995 Bosnian Serb massacre of 8,000 Muslims at Srebrenica.

But it said Serbia had violated its obligation to prevent and punish genocide.

Haris Silajdzic, a Bosnian Muslim leader, said: "It turns out there was genocide in Bosnia but it is not known who committed it."

A guilty verdict may have meant compensation claims in the billions.

Bosnians who had long hoped for the truth about the 1992-95 war to be acknowledged felt cheated. Zeljko Komsic, a Bosnian Croat leader, said: "We who were in Bosnia know what happened here right from the beginning of the war and I know what I will teach my kids."

Vojislav Kostunica, Serbia's caretaker prime minister, issued a statement which did not acknowledge any Serb guilt.

"The ruling ... is particularly important because it has freed Serbia of the serious accusation that it committed genocide," he said. "Light must be shed on all war crimes and their perpetrators, and must be punished in a court of law."

At least 200,000 people died in the fighting, three quarters of them Muslims and Croats.

Bosnian Serbs using the might of the Yugoslav Army against their lighter-armed adversaries swept swathes of land clean of non-Serbs, culminating in Europe's worst atrocity since World War II, at Srebrenica.

Aleksandar Popov of the Igman Initiative group for normalising Serbia-Bosnia relations called the verdict a "symbolic slap" and predicted "gloating" by nationalists.

For Bosnian Serbs who opposed the lawsuit filed by Bosnia's Muslim-led government in 1993, the ICJ ruling established that their republic was not founded on genocide, as Silajdzic argues, and should not be dissolved.

For Fatija Suljic, 60, who lost her husband and three sons at Srebrenica, the ICJ's ruling was "a disaster for our people".

Nenad Canak, of Serbia's new Social Democrat-Liberal Democratic coalition, said of the ruling: "The only thing I can say is to remind you of the words of Primo Levi written on a wall in Dachau. 'The man who denies Auschwitz is the same one who is ready to repeat it'."