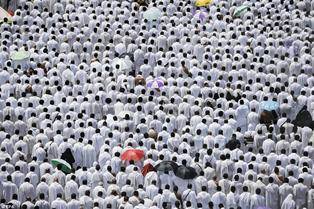 responded: "You know for sure that I am more devout, more truthful, and more righteous than any of you. Yet, had I not offered Hady, I would have ended my state of Ihram. You, therefore, should end your state of Ihram." [Al-Bukhari]

5- His tranquility and submission to Allah

Presence of the heart, and submissiveness to Allah, Almighty, can be attained only through tranquility and strict discipline of the senses. The outer appearance in this regard, is an indication of the inner reality. In his Hajj, the Prophet

senses were full of submission and surrender to Allah, Almighty. He would walk quietly in reverence and tranquility going about his rituals. Jabir

reported that as he and the Prophet

then pointed his whip at the people and said: "Be quiet; haste is no indication of righteousness!" [At-Tirmithi]

Not only did the Prophet

was also keen on doing the same during the Hajj. This is manifest in his performance of all the favorable Hajj rituals. He performed Ghusl (ritual body wash) before assuming Ihram, wore perfume upon assuming and ending it, [Al-Bukhari], marked and garlanded the sacrificial animal, and frequently recited talbiyah aloud until he

had cast the Jamaratul-'Aqabah ('Aqabah Stone). [Al-Bukhari] He also started Tawaf as soon as he entered the House, [Al-Bukhari], walked briskly in Tawaf, touched the two corners of the Ka'bah, offered two Rak'ahs of Tawaf behind Maqam Ibraheem (Ibraheem's station), [Muslim], supplicated Allah on the hills of Safa and Marwah, ran in the middle of the valley, supplicated upon touching the two corners and while throwing the jamarat [Al-Bukhari]. There are many other acts that he

7- His moderation and equanimity

Islam encourages moderation and censures exaggeration. In fact equanimity was the most significant attitude of the Prophet

took shelter in a dome made from camel hair erected especially for him, moved between the sacred sites [Al-Bukhari], and performed some of the Hajj rituals riding on camelback [Muslim]. Furthermore, he even had someone who served and helped him. [Ibn Majah]

8- Renouncement of the present life

renounced the present life and rejected all that was not vital for the Hereafter. There are countless examples of his denunciatory attitude towards the present life. Listed are but a few:

to ride behind him on his camel back from 'Arafah to Muzdalifah, and allowed Al-Fadhl Ibn 'Abbas

to ride behind him from Muzdalifah to Mina. [Al-Bukhari]