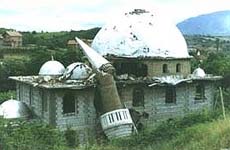 After more than 13 months of talks, Serbian and ethnic Albanian leaders have failed to reach a compromise on the future of the disputed province of Kosovo.

The two sides were discussing a UN proposal that offers the trappings of statehood, including a constitution, flag and national anthem, under a draft but does not mention formal independence.

The plan was welcomed by the ethnic Albanians of Kosovo but was flatly rejected by Belgrade.

"There was no real will from the parties to move away from previous positions," Martti Ahtisaari, the UN special envoy for the future of Kosovo, said on Saturday at the end of the final one-day meeting.

"It has left me with no doubt that the positions of the two sides do not contain any common ground.

"I regret to say that the potential of negotiations is exhausted."

Ahtisaari said he would now finalise details of the plan and send it to the 15-member Security Council.

Kosovo has been run by the United Nations since a Nato bombing campaign drove out Serb forces in 1999.

About 10,000 ethnic Albanians died were killed during the province's 1998-99 war with Serbia, and another one million fled.

Diplomats do not feel that they can put the province's two million Albanians back under the control of Belgrade and fear unrest if the population does not see a solution soon.

Belgrade is hoping that its ally Russia will block approval of the plan. Moscow has already raised objections to giving Kosovo independence but has not said whether it will use its right of veto on the Security Council.

Belgrade wants a new process of negotiations and has accused Ahtisaari of openly supporting Pristina's call for independence.

"Serbia appeals for negotiations to continue, but the real ones, not these so-called negotiations," Vojislav Kostunica, the Serbian prime minister, said.

It has offered the province "substantial autonomy with international guarantees" instead of independence.

Kosovo Albanians saw no point in further talks, blaming Belgrade for "failing to see the reality."

Under the plan, the province would remain under international supervision and Nato troops would stay in Kosovo to ensure peace and stability. The province's 100,000-strong Serb minority would get self rule and protection.