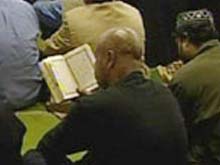 Muslim leaders in Australia have announced plans to form a political party to fight what they say is a growing Islamophobia.

The move came as the leader of a Christian party demanded an immediate halt to Muslim immigration to Australia, saying that Muslims were beginning to dominate some communities.

Shaykh Tajuddin al-Hilali, the Mufti of Australia, is leading the drive for the country's 300,000 Muslims to get more involved in politics.

The Egyptian-born shaykh faced calls to leave Australia but responded by saying that Muslims had more right to the country because they had paid for their tickets unlike many of the population's convict ancestors.

Al-Hilali's spokesman said, that the shaykh wants to put a stop to politicians using the Muslim community as a "political football".

It is unclear how much support al-Hilali's party would have in the Muslim community as several other Muslim leaders distanced themselves from his views in the aftermath of his controversial comments.

Morris Iemma, the premier of the state of New South Wales, challenged al-Hilali in January to stand in elections so voters would have the opportunity to reject his views.

The party would aim to "reclaim the fair go", Keysar Trad, al-Hilali's spokesman told reporters, referring to Australia's much-vaunted policy of equality for all.

"The whole notion has slowly been eroded with all the fears and apprehensions," he said on Monday.

"The so-called war on terror has become one of the worst means of dividing society through making people afraid of their own neighbours."

Reverend Fred Nile, leader of the Christian Democratic Party, has called for a 10-year moratorium on Muslim immigration and for Christians fleeing persecution in Islamic countries to be given priority.

Nile, a member of the state parliament in New South Wales, told a radio interviewer he wanted a study to look at the Netherlands and France, where the Muslim minority had become large enough to "flex its muscle".

"The same thing is happening in our city of Sydney ... they [Muslims] concentrate and virtually, by population numbers, they dominate that actual community," he told Southern Cross Broadcasting.

Trad rejected Nile's remarks as "sensationalist headline grabbing", and denied there was any link between his comments and the announcement of plans for an Islamic party.

"The political parties are focusing too much unfair attention on Muslims," he said. "We have to do whatever we can to make politicians focus on real issues rather than diversions on Muslims."

The party could possibly field candidates in elections for the national parliament by the end of the year and would set its sights on winning seats at all levels of government, he said.

The government of John Howard, the prime minister, has been accused of creating anti-Muslim sentiment through tough new anti-terrorism laws and tighter immigration controls, including a test on "Australian values".

It denies that the moves target Australia's Muslim community, but Howard has frequently expressed his fears of a home-grown ‘Islamic’ terrorist attack similar to that which struck London transport system in July 2005.

Trad said that people of other faiths would not be excluded from the party.

"The whole idea is to promote fairness across the board and specific values, such as honesty and dignity and equality."