Preparing for Hajj and ‘Umrah – I 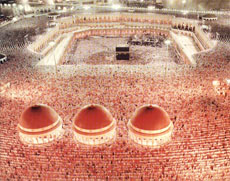 Every year, millions of Muslims make the journey of their lifetime. They come from all over the world for the sole purpose of fulfilling one of Allah’s greatest commandments to mankind – the Hajj (The Pilgrimage to Makkah). Abu Hurayrah

narrated that “The Prophet

was asked, ‘Which is the best deed?’ He

said: ‘To believe in Allah and His Messenger (

was then asked, ‘Which is the next (good deed)?’ He

said: ‘To participate in Jihad in Allah’s Cause.’ He

was then asked, ‘Which is the next?’ He

said: ‘To perform an accepted Hajj.” [Al-Bukhari] For over 1400 years, believers have been making Hajj to the House of Allah in Makkah. It is an obligation for each and every Muslim to perform Hajj at least once in his/her lifetime if he is physically and financially able.

Due to the importance of Hajj, preparations for it should not be taken lightly. Besides planning the actually logistics of the trip, the Muslim needs to prepare Islamically, physically, mentally, and financially for this great act of worship. Islamically, one of the most important preparations for this journey is acquiring the necessary knowledge for performing the rituals of Hajj and ‘Umrah correctly and in accordance to the Sunnah of the Prophet

. This means studying and learning about Islam, acquiring a high degree of Eeman (faith) in order to deal with the emotional and physical demands of Hajj, and learning correctly the actual religious rituals and requirements from the beginning to the end of Hajj and ‘Umrah. Studying and learning about the Hajj can be accomplished in a variety of fashions, from reading books on the subject or using computer programs which utilize a multimedia format, to actually taking classes offered by Islamic centers on the rituals of Hajj and ‘Umrah. Furthermore, many travel groups that specialize in Hajj and ‘Umrah trips offer Hajj preparation classes as well as scholars and students of knowledge that help those going for Hajj perform the rituals of Hajj and ‘Umrah correctly.

In addition, it is important to mention that spiritually preparing for Hajj and ‘Umrah is also a lesson on how to follow the footsteps of the Prophet

who taught the Companions

– a lesson that can be transformed into other acts of worship. Preparing for Hajj is a spiritual experience with a period of self-reflection and a lesson in piety and humility. The pilgrim must focus on his sole intention of performing Hajj. That it is solely for the pleasure of Allah and in accordance to His Commandment regarding this act of worship. The believer also needs to resolve any conflicts or differences between him and others and seek forgiveness for any acts of transgression. This stage of preparation should take place long before the actual departure for Hajj.

Other preparations that should be planned long before the actual trip are financial in nature. Simply, going to Hajj costs money. Furthermore, the pilgrim must pay off any old debts (this includes any type of loans), household bills, and leave enough money to pay any living expenses likely that other members of his family not making Hajj might need. Finally, it is important to complete one's will (Wasiyyah) before departing on Hajj.

Another important step in preparing for Hajj is the need to prepare physically for the event. Not only is Hajj a spiritual event, it also requires a lot of physical stamina from the participant. Hajj is not a picnic! Completing the rites of Hajj includes a lot of walking, mixing with many people, living in high temperatures (during summer), and exerting a great deal of effort. Another important step in preparing physically for Hajj is to make sure you are medically fit for the trip. Individuals with chronic health issues need to see their primary care physician in order to discuss any medical risks that need to be addressed prior to their Hajj experience.

Another recommendation is that these individuals also travel with a healthy caretaker in case any problems might arise during the actual Hajj. In addition, pilgrims must have the necessary vaccinations required by the Saudi Government for cholera and meningococcal meningitis. Because of these issues, it is also important to emphasize that one should complete Hajj and ‘Umrah as soon as one is able to both physically and financially. Some people wait until they are old to go for Hajj. This is wrong and makes Hajj more difficult than necessary for the participant and in many cases for his traveling companions. Performing Hajj as soon as possible corresponds to the Hadeeth narrated by Abdullah ibn Abbas

said: ‘He who intended to perform Hajj should hasten to do so.’" [Abu Dawood]

The last pre-logistic preparation centers on preparing mentally for Hajj. This includes learning and accepting that the Hajj experience includes frustration, intense dessert heat (during summer), and various differences in culture and food. The pilgrim can expect to stand in long lines, be shoved and pushed by others while completing the necessary rituals, and be in an uncomfortable close proximity to members of the opposite sex.

One purpose of Hajj is for the individual to be tested. The individual will be tested on physical, emotional, and spiritual levels.