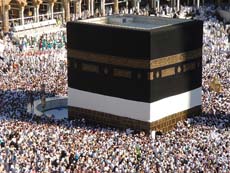 The first thing to look for in a group is the price of the trip. Most groups offer a variety of price packages that depend on a variety of factors. These factors include the type of hotel, number of people per room, use of private transportation, and whether or not food is included within the package. Hajj is not the time to go cheap. Since Muslims within the West are generally accustomed to a certain degree of comfort, some Western Muslims would find less expensive accommodations unacceptable and uncomfortable. For example, during Hajj some hotels accommodate up to 15 people per room sharing a single communal bathroom. Furthermore, many Western Muslims are used to a certain degree of cleanness in their hotel rooms and eating establishments that is not found in all hotels and restaurants. Another factor to consider is the distance of the hotel accommodations from the Haram (the Sacred Area). As a rule of thumb, if the price is too cheap, so is probably the quality of the package. In other words, the cheaper in price of the package, the higher the probability of encountering problems during your Hajj, which in turn, can make for a more difficult Hajj experience.

Another thing to look for is the number of years of experience of the tour operator. Generally, experienced operators are the best since they are able to handle any problems that can and will probably occur during Hajj or ‘Umrah. Also, it is important to make sure that an experienced leader from the tour group accompanies the group for Hajj, since it is not uncommon to loose members of your group sometimes for hours or even days. Other problems that often occur include lost or stolen belongings and money, illnesses that require medical attention, and the death of a group member. It is important for the pilgrim to understand that their Hajj will not be problem free. Problems arise frequently and an experienced tour operator is needed to handle the situation. When looking for a tour operator, it is important to ask how they handle problems. If the potential tour operator tells you that you will have a problem free Hajj, continue searching for a better program.

Researching the business strength of your potential tour group is another important step in choosing a tour group. Generally, it is better to choose groups that have offices or contacts within Saudi Arabia. These contacts can make a Hajj experience run more smoothly in a number of areas which include helping facilitate and streamline the customs process in Jeddah (which can take between 8 to 20 hours) to providing private ground transportation and buses for the pilgrims. One thing that is highly recommended is to look for a company which offers its own private tour buses. This is especially important since the pilgrim can literally expect to wait for hours for public transportation.

Another important quality of the travel agent is the degree they are versed in the rules and regulations of the Hajj process. This includes helping the pilgrims with the VISA process from the Saudi Arabian Embassy or Consulate to understanding the Hajj and ‘Umrah rites from an Islamic standpoint. For example, in order for a pilgrim to enter Saudi Arabia, there are certain requirements that need to be met from the Saudi Arabian government. These requirements include the necessary vaccinations; if the person has a non-Muslim name, a letter from a Mosque stating he is Muslim is needed. Women must have proof of being accompanied by a Mahram (non-marriageable relative). In addition, there are fees that need to be paid in advance for use of the public transportation system and use of the tents in Mina (where the Pilgrims sleep overnight on 8th, 11th and 12th of Dhul Hajj) along with the necessary forms that need to be completed in full and approved prior to the trip. It is also best to use a travel agent that utilizes scholars as religious guides for the trip. Besides helping to keep the travel group focused on the worship of Allah, rather than on worldly distractions such as chatting, playing cards, etc., he is also available to ensure that group members are correctly performing the rituals.

Making Hajj and ‘Umrah can be one of the most important events in a Muslim's life. However, one should not make the decision to go on Hajj or ‘Umrah at the last minute. The planning of this trip takes time and is a process within itself.

Besides the financial aspects of the trip, one needs to be ready for the trip from an Islamic standpoint. This includes studying Islam, knowing what is obligatory and what is non-obligatory in the rites of Hajj and ‘Umrah, and the development of a strong Eeman (faith). While both the process and task of Hajj can be difficult for some, the rewards of Hajj can be underestimated. In a Hadeeth narrated by Abu Hurayrah

said: “Whoever performs Hajj for Allah's pleasure and does not have sexual relations with his wife and does not do evil or sins then he will return [after Hajj free from all sins] as if he were born anew.”  [Al-Bukhari]

Preparing for Hajj and 'Umrah - I